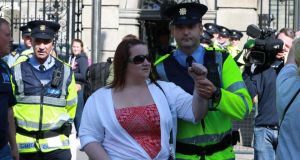 A protester is led away from the Dáil entrance during anti-water charge protests last night. Photograph: Nick Bradshaw

Senior Government Ministers have insisted the first bill payment figures from Irish Water are positive, despite scathing criticism from the Opposition on what they claimed was a very low payment rate.

Taoiseach Enda Kenny, Tánaiste Joan Burton and Minister for the Environment Alan Kelly yesterday welcomed the collection rate for the first quarter. Irish Water figures showed 43 per cent of customers, or 675,000 households, had to date paid bills that were issued in April.

Mr Kenny said the charges were very fair and the Government had been quite clear that water would not be cut off and people would not be sent to jail for not paying. He said he expected the compliance rates to increase.

Tánaiste Joan Burton said the first round of bills from Irish Water had seen a “solid response”.

Asked about the fact that the new utility had collected less than half the revenue it had expected in the first three months of billing, Ms Burton said the actual rate of payment among commercial users of water was also “quite low”.

“So I actually think that the response is a very solid response and I think it lays the foundation for Irish Water developing a collection system which will be on a par with both the ESB and with Bord Gáis.”

Mr Kelly, the Minister with responsibility for the State- owned utility, said he was encouraged by the figures.

However, the Opposition said the fact that a minority of householders had paid represented a failure, with several prominent anti-water charges campaigner calling on the Government to scrap the project.

“You are ramming through unprecedented legislation to pickpocket the income of already hard-pressed citizens to prop up your discredited Irish Water quango,” she said.

Fianna Fáil environment spokesman Barry Cowen claimed the figures represented yet another nail in the coffin of Irish Water’s credibility.