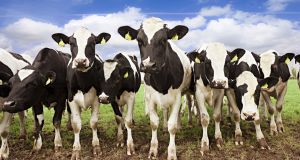 Government accepts that in two key areas, transport and agriculture, emissions will actually increase between now and 2020. Photograph: Oktay Ortakcioglu/E+/Getty

Five years behind deadline, the Government has finally published a National Mitigation Plan to a chorus of condemnation from environmentalists.

Minister for Communications, Climate Action and Environment Denis Naughten published the plan on his department’s website, outlining how the Government will meet stringent EU greenhouse emissions targets for 2020 and 2030 and achieve a low carbon economy by 2030. The plan is a requirement of new climate change laws enacted two years ago.

The 91-page document examines the four main areas of economic activity where the Government assumes responsibility in reducing emissions. They are electricity, the built environment, transport, and agriculture and forestry.

In his response to the plan, Mr Naughten acknowledges the difficulties: “It is clear that there are no easy options to reduce our greenhouse gas emissions on the scale required in the coming decades.”

Green Party leader Eamon Ryan excoriated the document saying it was not a plan, but a consultation document. He said energy policy had “been frozen in a lack of interest.”

According to Mr Ryan, smart metering was being long-fingered, agriculture was not being tackled and there was no vision for sustainable transport, including cycling, which was neglected. “It’s a plan about a plan,” he said.

Oisín Coghlan of Friends of the Earth said the Government was in denial over climate change.

“They deny the urgency to act. They puzzle over the exact cost of any given action and give no thought at all to [the] cost of inaction. The ‘action plan’ contains no new actions, no new measures to actually reduce pollution,” he said.

It accepts that in two key areas, transport and agriculture, emissions will actually increase between now and 2020.

In relation to agriculture, the report says a “a flat-lining in emissions would represent significant ambition by the Government in addressing agriculture-related emissions, rather than complacency.”

Many of the key strategic long-term projects in the document are presented as possible options, or are being put out to public consultation or made part of a future review.

The report states it is not a “wait and see” exercise but many of the possible policy options are contingent on future events or funding. While the coal-burning Moneypoint and peat-burning stations are being phased out, the plan contains no specific details on alternatives.

On transport, the plan gives no commitments to any increased spending on electric vehicles or sustainable travel such as walking and cycling. Some options that are broached without commitment are reducing public parking spaces and a possible reduction of speed limits on motorways from 120kmph to 110kmph.