Bill to reform the way judges are appointed will be approved next week, says Shane Ross 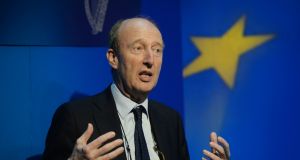 Minister for Transport, Tourism and Sport Shane Ross: refused to agree to judicial appointments last year as he was seeking reforms of the way judges are appointed. Photograph: Alan Betson

The Cabinet has decided to make a number of judicial appointments, including a number with Fine Gael links, to fill vacancies arising because of the retirement of a number of judges.

Solicitor Eileen Creedon and senior counsel Charles Meenan have been nominated to fill two vacancies in the High Court. The formal appointments will be made by the President.

Ms Creedon is the Chief State Solicitor, while Mr Meenan has practised as a senior counsel since 1998. He is a member of a well-known Dublin legal and medical family, which has long been associated with Fine Gael.

Unusually, the Government also approved three nominations to fill vacancies that will not occur until later in the year. Brian O’Shea, a barrister, will be appointed to the District Court on June 16th when Judge Aeneas McCarthy retires. Barristers Martina Baxter and Eoin Garavan will be appointed to the Circuit Court in August and October, once other retirements take place.

Mr Garavan is a former Fine Gael member of Castlebar Town Council, and is a son of the late Judge John Garavan.

The appointments take place despite previous opposition to judicial appointments from the Minister for Transport Shane Ross, who refused to agree to appointments last year as he was seeking reforms of the way judges are appointed.

Mr Ross agreed a deal with the Taoiseach and the Minister for Justice late last year to sanction a small number of appointments on condition that the legislation for a new appointments system would be published by the end of January.

However, that legislation has been repeatedly delayed. A spokesman for Mr Ross said it will be approved by the Government and published next week.

At a briefing for political correspondents after the cabinet meeting, Mr Ross’s spokesman said that the judicial appointments Bill was “a priority”. Although Fianna Fáil has said that it will oppose the Bill, the spokesman said that there would be “no problem” getting the Bill passed, as Sinn Féin and some independents had indicated they would support it.

“There’ll be no difficulty getting it through,” he said.

1 Tony Holohan stepping back from role as chief medical officer
2 Coronavirus: Rise in transmission in Ireland sparks concern
3 Several factors pushing Boris Johnson towards a Brexit deal with Brussels
4 A ‘rock’ and a ‘patriot’: Tributes paid to Tony Holohan as he steps back
5 All change at the unique Ashford Castle in era of Covid-19
Real news has value SUBSCRIBE