Goal has €7m in funding withheld over US investigation 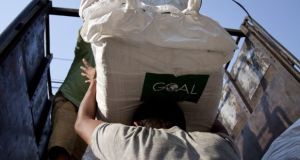 A senior manager has resigned from Goal and the Government has withheld a further €7 million in funding from the aid agency. Photograph: Goalglobal.org

A senior manager has resigned from Goal and the Government has withheld a further €7 million in funding from the aid agency as the fallout continues over a US investigation into international aid operations in Syria.

A Goal spokesman confirmed Jonathan Edgar had resigned but declined to comment further.

As chief operations officer, Mr Edgar was a key figure at Goal during a period of major expansion, having joined the agency when it was led by its founding chief executive, John O’Shea.

Goal and other agencies operating in Syria were ordered to halt procurement using some American funds earlier this year, as the US government’s foreign aid arm, USAid, began an investigation into alleged bribery and bid-rigging.

A spokesman yesterday confirmed that, “pending further clarification” on the investigation, a further €7.16 million in long-term development funding had since been held back, bringing the total to €10.1 million.

Irish Aid funding accounted for 9 per cent of Goal’s funding in 2015, providing humanitarian aid to more than 1.15 million people across 10 countries.

“Any funding interruptions present challenges but Goal is managing the situation and all current and ongoing Irish Aid-funded programmes are continuing as normal,” a spokesman for the agency said.

“However, a number of new proposals that had been earmarked for Irish Aid funding are currently on hold.”

Mr Edgar was one of three people with connections to Goal who in 2013 set up a private firm, Noble House Business PLC, which provides logistics support to aid agencies in the field.

Goal said it became aware of the potential conflict of interest in 2013 and made it clear that involvement by staff with potential service providers was “not acceptable”.

It is understood Mr Edgar was already in the process of severing his ties with Noble House by that time.

As a supplier to many NGOs on the Turkey-Syria border, Noble House has been part of the USAid investigation.

There is no suggestion of wrongdoing by Mr Edgar, however, and he is not believed to be under investigation by USAid.

He did not respond to calls this week.