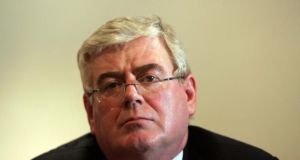 Tánaiste Eamon Gilmore denied he was trying to capitalise on the pope’s popularity and said the decision was taken because of the Holy See’s renewed focus on tackling “hunger and world poverty” under Francis.

Tánaiste Eamon Gilmore has linked the Government’s decision to reopen the Embassy to the Holy See to the arrival of Pope Francis.

However, Mr Gilmore denied he was trying to capitalise on the pope’s popularity and said the decision was taken because of the Holy See’s renewed focus on tackling “hunger and world poverty” under Francis.

Mr Gilmore also denied the decision to reopen the embassy just over two years after it was closed amounted to a U-turn.

In an interview with The Irish Times, the Tánaiste said one of the main reasons was “looking at what Pope Francis has been saying about tackling world poverty and hunger”, which he described as a cornerstone of Ireland’s own foreign policy.

“There is a reason now to have a resident, one-person mission in the Vatican, which is the aid issue, the hunger and world poverty issue is on the UN agenda and Ireland and the Vatican are in the same place on that issue,” he said.

When asked if the Government might again close the embassy if it disagreed with a future pope’s policies, the Tánaiste said: “It’s not about the individual, it’s about the objective which is about addressing the issue of poverty and hunger.”

However, while he said all embassies are constantly kept under review, the Vatican will be open “for the foreseeable future”.

“I don’t subscribe to the view that embassies are open forever and a day. I think we’re living in a changing world.”

Mr Gilmore also denied that he had performed a U-turn.

“Not at all. I said from the very start we would review the decision when we were looking at missions again and that’s what we’ve done. It’ll be significantly less cost. There is no additional cost to the taxpayer.”

“Modest”
The new embassy will be staffed by one diplomat and will be based in a “modest” office, the Department of Foreign Affairs said, in a separate building to the Irish Embassy in Rome, which is housed in the Villa Spada, where the old Vatican embassy was located.

Many TDs in the senior Coalition party were critical of the initial closure and the reopening was welcomed yesterday by Chief Whip Paul Kehoe, as well as TDs Pat Breen and Patrick O’Donovan and Senator Paul Coghlan.

Fianna Fáil spokesman on foreign affairs, Brendan Smith, said it is “not credible” that the new pope is one of the main reasons for reopening the embassy.

“They made a mistake the first time and Labour has been forced into a U-turn,” he said. “The Vatican is a very important listening post and a crossroads for discussion.”

The Archbishop of Armagh, Cardinal Sean Brady, welcomed the decision and said he looked “forward to ongoing and fruitful co-operation between Ireland and the Holy See for the common good”.

Archbishop Charles Brown, the papal nuncio, described it as “an excellent decision for the people of Ireland” which will be beneficial in making a “distinctive and important contribution to international relations”.