Gilmore and Haass to speak about ‘window’ for NI talks 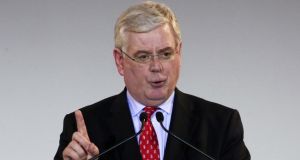 Tánaiste Eamon Gilmore who said he would speaking to Dr Richard Haass today about a possible resumption in the Northern Ireland talks in which the US diplomat could have a role. Photograph: Collins

Tánaiste Eamon Gilmore is due to talk to Dr Richard Haass today as the political fallout from the arrest and detention of Gerry Adams for five days brings renewed focus on dealing with legacy issues facing Northern Ireland.

Mr Gilmore said while the talks chaired by Dr Haass had broken down without agreement on New Year’s Eve, the process had not failed.

The arrest of Mr Adams on Wednesday triggered a bitter political row with Sinn Féin accusing an “old cabal” within the Police Service of Northern Ireland (PSNI) of orchestrating the detention with the aim of damaging the party ahead of the European and local government elections.

This was angrily rejected by political rivals, whose fury intensified when Sinn Féin indicated that its support for the police - a critical plank in the peace process - would be “reviewed” if Mr Adams was charged.

Sinn Féin reported this evening that the PSNI has warned Gerry Adams and senior republican Bobby Storey of a threat to their lives. The party’s justice spokesman Raymond McCartney said that police called to the west Belfast homes of Mr Adams and Mr Storey “to make them aware of death threats from criminal elements”.

Earlier, the Tánaiste said there is a window of time between the end of the elections and the start of the marching season in which progress could be made and said “there may well be a role for him [Dr Haass]again”.

The Tánaiste said he believed there was time between the elections in May and the marching season in July to make progress on some issues.

The Haass talks process - which examined the disputes on flags, parades and the legacy of the Troubles - broke down on New Year’s Eve without a consensus being reached.

The Sinn Féin president spent almost 96 hours in custody from Wednesday evening in police custody. Mr Adams was released from Antrim police station yesterday evening and the PSNI said he was “released pending a report” to the North’s Public Prosecution Service.

Northern Ireland Secretary Theresa Villiers said this morning she was pleased Sinn Féin had not followed through on its threat to withdraw support for the PSNI over the arrest of Mr Adams because such a move would have been “very destabilising” for Northern Ireland.

Ms Villiers said she was told of the impending arrest of Mr Adams on Monday, two days prior to his detention but said she not discuss the matter with any member of the Irish Government until after the arrest became public.

She rejected a suggestion that the PSNI had succumbed to “bully boy” tactics from Sinn Féin and said the police and the public prosecution service would make a decision on the next steps in the case based on “the evidence”.

Former Northern Ireland secretary of state Peter Hain meanwhile said both sides in the North need to move beyond the “gridlock” of the past.

He said if Mr Adams was to be arrested and questioned over a crime from decades ago then so too should British soldiers who were involved in killings.

“If Gerry Adams has been questioned then so should the British soldiers, contrary to what I believe because I believe these things should be dealt with in a different way entirely,” he told the RTÉ News at One.

He said both sides in the Northern Executive needed to develop a “negotiated way forward”. He added: “The Irish Government needs to bring its influence to bear as well. Otherwise we will simply have this continual delving back and preoccupation with the past.”

It will now be for the North’s deputy director of public prosecutions Pamela Atchison to decide if the PSNI has built up a case against Mr Adams in relation to the 1972 murder of Ms McConville that would stand up in a court.

Following his release last night Mr Adams again insisted he was “innocent” of any involvement in the murder of Ms McConville. He said there was no basis for criminal charges to be made against him.

He said that much of the questioning centred on claims contained in the “dubious” Boston tapes, Boston College’s oral history of the Troubles, while he was also asked about his involvement in republicanism going back decades. “I reject all the allegations made against me in these tapes,” said Mr Adams.

He offered his sympathy to the “McConvilles and all who have suffered at the hands of republicans”.

Mr Adams and his Sinn Féin colleagues were forced to leave Antrim station by another entrance due to a protest by more than 100 loyalists at the front gate.

Sinn Féin deputy leader Mary Lou McDonald today described the police questioning faced by Mr Adams as a “charade” and a “fishing expedition” and asked why Mr Adams was arrested rather than questioned under caution?

She said there was an issue with an “old cabal” within the policing service that needed to dealt with.

“What happened here is that over the course of 33 taped interviews, those interviewing Gerry Adams seemed to be on a fishing expedition . . in that they questioned him about his entire life; about his babyhood, his childhood into his adulthood.”

She said there was no new evidence against Mr Adams and that the questioning revolved around the Boston tapes, which include interviews with Brendan Hughes and Old Bailey bomber Dolours Price.