As trust nosedives, could the Whelan controversy lead to an early election? 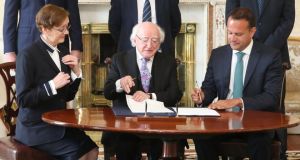 The edgy exchanges between the Fine Gael leader, Leo Varadkar, and his Fianna Fáil counterpart, Micheál Martin, yesterday indicated that trust between the two has nosedived, just a week into the new Taoiseach’s reign.

The fault line for this seismic political event was the Government’s hasty appointment of the former attorney general Máire Whelan to the Court of Appeal. For a week the Government has faced Opposition claims that it bypassed established procedures to facilitate the departing law officer for the Government.

The Government has argued that it was perfectly entitled to appoint her the way it did. That is true. It has reserved powers to appoint a candidate to the courts and can bypass the Judicial Appointments Advisory Board, the body set up in 1995 to essentially regularise the appointment of judges.

That approach has two inherent weaknesses. The entitlement argument is no longer as politically acceptable as it was, and is reminiscent of the former FÁS head Rody Molloy telling a Dáil committee that he was “entitled” to take first-class flights to faraway destinations.

The second is that the Judicial Appointments Advisory Board process has become well established. In the 22 years since the enactment of the Court and Court Officers Act several hundred appointments have been made through it.

There was only one exception. That was for the Supreme Court judge Frank Clarke, who was appointed to the High Court, by a Fianna Fáil government led by Bertie Ahern, without having to apply to the advisory board. (Two other working barristers, Adrian Hardiman and Donal O’Donnell, were appointed directly to the Supreme Court, but they are understood to have gone through the board.)

The manner of Clarke’s appointment has undermined the Fianna Fáil position somewhat. Last night its justice spokesman, Jim O’Callaghan, contended that the circumstances were exceptional and that, during a small window when he became available, Clarke had been “correctly grabbed” by the government and made a judge.

Leo Varadkar might have made the same argument about Whelan: she became available and was “correctly grabbed”.

But this is where the damaging fissure became evident. In the US presidential election of 1988 the Republican vice-presidential candidate, Dan Quayle, claimed to have as much experience in the US Congress “as Jack Kennedy did when he sought the presidency”. It prompted a famous put-down from Lloyd Bentsen, Quayle’s Democratic rival: “Jack Kennedy was a friend of mine. Senator, you’re no Jack Kennedy.” Micheál Martin paraphrased Bentsen, asserting that Whelan was no Clarke, or Hardiman, or O’Donnell.

That prompted the bitter scenes of the past two days in the Dáil, where Varadkar, accompanied by a battery of angry and outraged Fine Gael Ministers and TDs, demanded that Martin withdraw the remarks.

Martin then escalated the row by accusing Varadkar of having been disingenuous the previous day. The Taoiseach, he claimed, had feigned surprise when Martin had doubted Whelan’s suitability. Yet Varadkar had known Martin’s views since Sunday night, when Martin had telephoned him.

Varadkar replied that, yes, Martin had conveyed that view, but it was in a private conversation and Martin had said he did not want to “go there” publicly. Now he had indeed “gone there”, said Varadkar, again inviting Martin to withdraw the remarks.

As the debate began last night the impasse remained between the sides. But, judged on its merits, Whelan’s appointment was rammed through rather than being made according to well-established procedures. In retrospect, indeed, although Clarke’s High Court appointment, more than a decade ago, caused no controversy, it should not have been made that way.

There are still many unanswered questions. Why had the Court of Appeal vacancy, open since March, not been filled despite later vacancies’ being filled. Was it in some way being reserved for Whelan? Did three High Court judges write to express an interest? Did Frances Fitzgerald, as minister for justice, know, and why was the Cabinet not informed?

Someone in the Government must have known that Whelan’s time as attorney general might end. Section 18 of the Court and Court Officers Act explicitly provides for when an attorney general wants to apply for a judicial position.

The criticism has not been confined to the Opposition. The Fine Gael TD Peter Burke is unhappy about the manner of the appointment. “We need a process that stands up to robust public scrutiny,” he said.

And Clare Senator Martin Conway expressed the dissatisfaction of some of his colleagues when he told a meeting of Fine Gael’s parliamentary party on Wednesday night that former taoiseach Enda Kenny had left his successor Leo Varadkar with a “landmine”.

The appointment is unlikely to be reversed. On a wider political level, though, it might be pushing us towards an earlier election than envisaged.