All four Fianna Fáil candidates in the Tuam area were successful 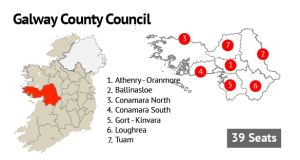 Fianna Fáil and Fine Gael won 15 and 11 seats respectively on Galway County Council and so will the two parties will dominate the next session.

Fine Gael’s Jimmy McClearn declared himself the “father of the house” after being re-elected in Loughrea on the first count. He is the longest serving member, having been first elected in 1991, although the Killimor native lost his seat for one term. His party colleague Michael ‘Moegie’ Maher topped the poll in Loughrea with 2,152 votes.

All four Fianna Fáil candidates in the Tuam area were successful, with the last remaining seats on the local authority being filled on Monday morning. Fine Gael’s Pete Roche topped the poll in Tuam and was followed home by Fianna Fáil’s Donagh Killilea. His Fianna Fáil colleagues Mary Hoade and Colm Keaveney retained their seats while newcomer Joe Sheridan from Milltown polled well to be the third elected in the seven-seat area. Andrew Reddington of Fine Gael was elected for the first time with party colleague Tom McHugh losing his seat by 10 votes as Independent Karey McHugh claimed the final seat on Galway County Council.

Shane Curley of Fianna Fáil took the third of the five seats in Loughrea. Ivan Canning, brother of Galway hurler Joe, reclaimed his seat on the third count – just in time for the Fianna Fáil politician to dash across the road and see he county’s senior hurlers draw with Wexford. Independent Pat Hynes claimed the last seat, being reelected without reaching the quota after the eighth count.

Independent Jim Cuddy retained his seat on the fourth count in the Athenry-Oranmore electoral area. The former Progressive Democrat paid tribute to Independent TD Noel Grealish for supporting him.

The retired garda became the third member elected in the seven-seat Athenry-Oranmore area along with James Charity (Independent) who topped the poll and 20-year old student Albert Dolan, who won a seat for Fianna Fáil. Independent Gabe Cronnelly retained his seat on the ninth count, with the distribution of his former Sinn Féin colleague Louis O’Hara’s vote helping his cause.

Shelly Herterich Quinn was also elected for Fianna Fáil in this area as were Fine Gael duo David Collins and Liam Carroll.

Martina Kinane retained her seat despite having her area moved from Athenry-Oranmore to Gort-Kinvara. The Fianna Fáil councillor was elected on the eighth count. The other four seats have been filled by Ms Kinane’s running mate Gerry Finnerty, Fine Gael duo Joe Byrne and PJ Murphy and Independent candidate Geraldine Donohue.

Independent Tom Welby became the first of the 949 councillors to be elected to a county council on Saturday after topping the poll in Connemara North.

Mr Welby retained his seat on Galway County Council when his 2,140 votes exceeded the quota of 1,455. The Oughterard-based councillor said he retained his seat without using posters and paid tribute to all those who supported him.

In the same local electoral area, Fine Gael’s Eileen Mannion was elected after Mr Welby’s surplus was distributed. And, after the third count, Fianna Fáil’s Gerry King and SeamusWalsh were also elected.

In Ballinasloe, Fianna Fáil’s Michael Connolly and Independent candidate Tim Broderick comfortably exceeded the quota and were both elected on the first count, with Sinn Féin’s Dermot Connolly taking a seat on the seventh count. Independents Aisling Dolan and Declan Geraghty were elected on the eighth count along with Peter Keaveney of Fine Gael, who survived the switch from the Tuam area.