Alcohol Bill enactment could be delayed until next year 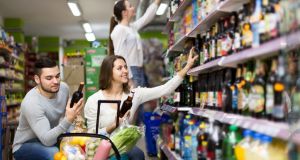 Minister for Health Simon Harris said he would talk to small retailers to discuss and explain how provisions for minimising the visibility of alcohol in smaller shops would work.

Taoiseach Leo Varadkar has conceded that the controversial legislation to reduce national alcohol intake may not now be enacted until next year.

Last week at the Fine Gael national conference he said he was determined to have the legislation passed by Christmas.

But in the Dáil he acknowledged that this may not now happen and it could be early next year before the Bill to deal with Ireland’s alcohol crisis will be in place.

The Taoiseach was responding to Social Democrats TD Róisín Shortall who raised concerns that “there will be yet another long delay in the Seanad when consultation is taking place”.

The legislation passed committee stage in the Seanad last week and was due back this week for the report and final stages but has now been postponed for consultation.

Minister for Health Simon Harris said in the Seanad last week that he would engage in brief discussions with small retailers to discuss and explain how the provisions in the Bill for minimising the visibility of alcohol in smaller shops would work.

Ms Shortall asked the Taoiseach for a timescale for the passage and enactment of the legislation which when finished in the Seanad, must go through the Dáil.

“It was expected that this would be done and dusted by Christmas,” she said and asked if that was still a possibility.

The Taoiseach told her the Bill “is very close to my heart. The Deputy and I are architects of it,” he added. Ms Shortall, a former minister of state of health was involved in the initial stages of the legislation, which stalled in the Seanad in October 2016, before it was reintroduced last week and passed committee stage.

Mr Varadkar said “I am very keen for it to pass through the Oireachtas as quickly as possible.

“The Government anticipated it would complete all Stages in the Seanad and, hopefully, be introduced into the Dáil before the recess but, if that is not to be the case, we expect it to be concluded early next year.”

Mr Varadkar reminded her that “the Government has a majority in neither the Seanad nor the Dáil. If it did, much more would be done much more quickly.”

Coronavirus: ‘Worrying trend’ of symptomatic people refusing Covid-19 tests 02:54
Covid-19: Ireland likely faces ‘imminent second wave’ due to reopening, experts warn 02:38
Coronavirus: Cabinet to consider whether to move to next stage of reopening State 02:36
Micheál Martin brings to an end one of the shortest ministries in history of State 02:30
Taoiseach sacks Barry Cowen after he refuses to resign 02:29