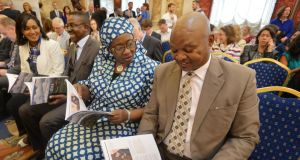 Minister for Foreign Affairs Charlie Flanagan has said he is confident Ireland will move closer to meeting its target of allocating 0.7 per cent of GNP to overseas development aid.

Mr Flanagan said he was proud of Ireland’s aid programme, which he described as one of the most effective in the world during difficult economic years. He was speaking at the launch of the Irish Aid annual report for 2014 yesterday.

“Oftentimes it may be populist to suggest charity begins at home and that we have many challenges across a range of national Government departments,” he said.

“However, I’m quite satisfied from my engagement with the Irish people over a long number of years, in terms of electoral engagement, that Irish people want to do this, they’re proud of what we do and they buy into the process.

“I do believe it’s important, and I say this as a member of Government, that we move closer towards the 0.7 per cent target and I’m confident we will.”

The 2011 Programme for Government committed the Government to a United Nations target of allocating 0.7 per cent of GNP for overseas development aid by 2015.

Last April, the Organisation for Economic Co-operation and Development (OECD) said Ireland had cut its 2014 spend on overseas aid as a proportion of gross national income to 0.38 per cent.

“We remain committed to it. We genuinely want to reach it but there is the issue of resource constraints . . . We’re not going to reach it in 2015, let me be honest about that, but we are committed to the target,” Mr Sherlock said.

Turning to Irish Aid’s work in 2014, Mr Flanagan said support for maternal health services for poor rural women had contributed to a 70 per cent reduction in deaths during childbirth in Ethiopia.

In Mozambique, support for training and recruiting teachers had contributed to a 9 per cent increase in the enrolment of girls in school, he said.

“These figures oftentimes seem like dry statistics on a page but the reality is otherwise,” he said.

Mr Flanagan said the interventions represented a dramatic impact in living conditions for some of the most vulnerable people on the planet.

Mr Sherlock said he had seen for himself the impact of almost €18 million in funding that was provided to Sierra Leone and Liberia to respond to the Ebola crisis.

He said 2014 had seen an unprecedented level of humanitarian crises.

“The world now has 59 million people who are refugees or displaced from their homes. Last year we provided over €85 million in humanitarian assistance as well as 269 tonnes of essential humanitarian supplies, such as blankets and tents, to those most in need.”

Ato Nunaka Yasin (32) lives in southern Ethiopia with his wife and four children. He is a small farmer with less than a hectare of land, and has always struggled to make a living. Due to erratic rainfall, Nunaka was rarely able to harvest enough food from his plot to feed his family. He worked as a farm labourer when he could get the work and received food aid and credit from neighbours.

Through an Irish Aid funded project, the Farm Africa Innovative Approaches to Food Security, Nunaka received training and access to finance through a savings and loan association. Following the training, he dug a water harvesting pond and installed a plastic geo-membrane, a treadle pump and drip irrigation technology for harvesting rain water.

He is now able to produce a variety of vegetables, such as tomatoes, cabbage, sweet potatoes, beetroot and sugar cane. He uses part of the harvest for family, diversifying the family diet, while the surplus is sold.

As a result of this project, Nunaka earned more than 7,000 Birr (over €300) last year. With this income, he purchased extra maize to sell when the price increases.