All-Ireland forum on Brexit will not work unless DUP prepared to participate, Minister says 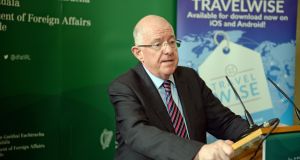 ‘I don’t think you can have a workable forum unless everybody is prepared to sit around the table and participate.’ Minister for Foreign Affairs Charlie Flanagan said. Photograph: Eric Luke / The Irish Times

Minister for Foreign Affairs Charlie Flanagan said the €1.2m in State funding announced on Friday for peace and reconciliation in Northern Ireland is vital to support the “fragile peace process”.

“This funding is very important in spite of the very acute economic recession that the country suffered over the past number of years it has been somewhat remarkable that we have been able to continue grant aiding many of the cross community programmes in Northern Ireland,”he told Newstalk Breakfast.

“We have been funding projects in Northern Ireland as far back as 1982 when the reconciliation fund was first established. Over that period of time we have contributed over €46million - it underlines the fact that this peace process - while there has been hugely positive progress especially since the signing of the Good Friday agreement in 1998, but at the same time it’s a fragile process and it’s a work in progress,” he said.

The Minister said he had visited some of these projects last year in Belfast and Derry. “I see communities working together. People knowing each other, working with each other, side by side, in a way that hadn’t been the case in the past and in a way that resulted in hostility and a very difficult time in Northern Ireland.”

Mr Flanagan also said that an all-Ireland forum in response to Brexit will not work unless the Democratic Unionist Party (DUP) is prepared to participate .

Last month Taoiseach Enda Kenny’s call for an all-island forum to deal with the fall-out from Brexit was dismissed by Northern Ireland First Minister and DUP leader Arlene Foster.

“I don’t think you can have a workable forum unless everybody is prepared to sit around the table and participate. That’s the essence of a forum. The DUP have indicted that they don’t wish to participate,” he told Newstalk Breakfast .

“That’s not to say that there aren’t other alternatives and opportunities. I speak to northern ministers all the time. We have agreed a programme of work for the autumn months between ministers in Dublin and ministers in Stormont.

“This work will continue but there will be particular reference throughout the autumn programme on Brexit and the negative impact of Brexit.

The Minister said the government had been very disappointed at the result of the UK referendum. “We would have preferred if the UK had voted to remain in the European Union, however that’s not the case and we have to respect the wishes of the people.

He said that the Irish government ‘will be at the table’ for all talks. “The UK might not necessarily be at the table for the entirety of the negotiations, but we will and the Taoiseach has said that from the very beginning because of the unique circumstance that is Northern Ireland given the trade, given the economic development given the social development, given the peace process in terms of bringing communities together.

“The European Union played a very positive role in ensuring the advances of the peace process. Anything that might jeopardise that would be wholly negative and I will ensure that won’t happen.”