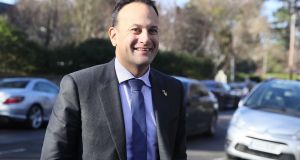 Leo Varadkar: ‘We are willing to consider participating in a government but only as a last resort, and only if we are wanted and needed.’ Photograph: Brian Lawless/PA Wire

Fine Gael is facing significant internal resistance against mooted plans to enter a grand coalition with Fianna Fáil and the Greens to avoid another election.

Some senior figures in the party have indicated they are open to such an arrangement as a last resort although others, including Cabinet members, are understood to be opposed. Sources said the general view in the party is still in favour of opposition.

The parliamentary party meets on Monday for the first time since the general election to discuss the next steps in government formation.

It is expected that Fianna Fáil leader Micheál Martin will make contact with Fine Gael leader Leo Varadkar after the meeting. The two are not expected to hold talks until after Thursday’s meeting of the new Dáil, where parties will vote on nominees for the position of Taoiseach.

A number of Fine Gael TDs have said privately that they would rather see another election than enter into a coalition with Fianna Fáil and other parties.

“There should be no contact with Fianna Fáil prior to our parliamentary meeting, and even then the party should be asked if we support the holding of any preliminary talks. Certain people advocating for a grand coalition may be used to having drivers, and like the notion of continuing in office,” one TD said.

Another TD said there would be a “huge challenge in persuading our members to do this. This will not be an easy one to sell.”

Despite the resistance senior members of Fine Gael have indicated that they support such a coalition if it is “in the best interests of the country”.

Speaking on Sunday and ahead of the party meeting, Mr Varadkar insisted that Fine Gael was preparing for opposition, and would only enter government as a “last resort”.

“Fine Gael is preparing for opposition. The country will need a strong and effective opposition. I relish the challenge of leading it.

“Sinn Féin should try to put together a government of the left with Independents. It’s difficult and would take time, but the votes are there.

“If that doesn’t work Fianna Fáil should try to form a government with the Greens, Labour and Social Democrat parties and Independents – the numbers are there.

“As I said during the election campaign, Fine Gael will not let down the State and Republic we founded. We are willing to consider participating in a government but only as a last resort, and only if we are wanted and needed.”

Senior figures in Fianna Fáil described speculation about a grand coalition involving a rotating taoiseach as “premature”. They said the coming weeks would be “tedious and tenuous”, but “if there is a will there is a way”.

The Greens will this morning (Monday) extend invitations to all of the main parties for bilateral meetings between February 21st and February 29th to discuss policy areas in an attempt to get clarity on “points of agreement and difference with each party”.

While the party will hold talks with Sinn Féin as part of this there is a growing gulf between the two over the future of the carbon tax and Sinn Féin’s promise to abolish the property tax.

Sources have also said that the Green Party will seek to significantly scale back planned investment on certain roads projects, which could provide a stumbling block in talks with Fine Gael or Fianna Fáil.

There is also reluctance amongst the Social Democrats about going into government with Fianna Fáil and Fine Gael, although it is understood a meeting is planned with Mr Varadkar on Tuesday.