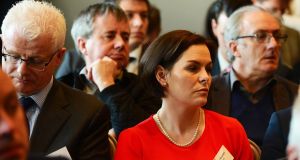 Eighteen Fine Gael selection conventions will be completed by Tuesday when the party’s executive council meets again to decide its strategy for the remaining conventions.

The party’s highest representative body met on Saturday and decided to hold selection conventions in two tranches. Only a handful of conventions had taken place before the political crisis engulfed the Government and its confidence and supply partners Fianna Fáil.

A dozen conventions are expected to be held on Monday and Tuesday.

When it meets the party’s executive council on Tuesday will discuss “tricky” conventions including five-seat Tipperary where the party has no Dáil presence and where an intensive battle has been ongoing for weeks.

Eight candidates are seeking selection including former TD Noel Coonan who lost out in 2016, Mary Newman, a sister of Fine Gael Dublin Bay South TD Kate O’Connell and Garret Ahearn, a driver for Minister for Foreign Affairs Simon Coveney and son of the late TD Theresa Ahearn. Up to three candidates will be selected.

If an election is called this week, all selection conventions will be decided by Thursday.

Fianna Fáil has said it will have all 40 selection conventions completed by Saturday at the latest.

Party sources have said that as of now 12 are completed and nomination papers have been filed in four more.

The national conventions committee met for four hours at the weekend.

A further 21 conventions “are ready to go” and could be completed within 24 hours if necessary but the committee took the decision to wait to see if a resolution could be found before going ahead.

“We’ve been working on conventions for the past eight months,” the party source said and “are at least as prepared if not more so than Fine Gael”.

Sinn Féin is finalising its selection conventions in the next couple of weeks but will fast forward a number of them if an election is called.

The Kerry selection convention is expected to take place on December 1st to choose a successor to TD Martin Ferris whose retirement party president Gerry Adams announced at the ardfheis, along with his own, just over a week ago. Mr Ferris’s daughter Cllr Toiréasa Ferris is one of the candidates running for selection.

A number of the smaller parties have said they are ready for an election, though they would prefer one in the new year.

Solidarity-People Before Profit are expected to run at least 30 candidates between them in an agreed division of the constituencies.

The Social Democrats hope to run more than 20 candidates and have selected 15 to date.