Profile: Tánaiste drew on doggedness and canniness to return from political wilderness 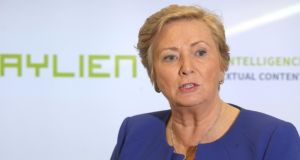 Tánaiste Frances Fitzgerald. As minister for justice she made it clear that the Garda’s difficulties required action from the force itself.

Frances Fitzgerald has risen to the second-highest Government office in Ireland during a career that has seen both triumph and defeat in liberal measure.

She entered politics in the early 1990s after serving as the chairwoman of the National Women’s Council and won the seat in Dublin South East that had been previously held by the former party leader and taoiseach Garret FitzGerald.

Holding a safe Fine Gael seat and with a high public profile, she seemed destined for high office, and soon. But in the hothouse atmosphere of internal party politics, she twice backed the wrong horse, and lost out.

In 1994, with Fine Gael languishing in opposition, Fitzgerald backed an internal challenge to John Bruton – which he defeated – and missed out on ministerial office when Fine Gael unexpectedly found itself in government a few months later.

She then backed Bruton in a later heave in 2001, which he lost to Michael Noonan. A year later, in the 2002 general election, Fitzgerald lost her seat. She failed to be elected to the Seanad a few weeks later.

She sought a nomination for the European Parliament and failed and was even overlooked for a council nomination in 2004. Lucinda Creighton took over the Fine Gael mantle in the constituency, and Fitzgerald was out. It looked like her political career was over.

But Fitzgerald (67) is canny as well as dogged. She moved to Dublin Mid-West – a wilderness for the party, but crucially an uninhabited one. She slogged her way to third place on the ballot in the 2007 election and though a lack of transfers squeezed her out, she won a Seanad seat a few weeks later and returned to national politics with a party on the up.

Crucially, her judgment on the next heave demonstrated she had learned from previous experience and she backed Enda Kenny to the hilt when Richard Bruton challenged him in 2010. When Fine Gael swept to power in 2011, Fitzgerald even brought in a running mate. Kenny made her Minister for Children in his first cabinet.

She shepherded the children’s rights referendum through in 2012, overcoming several campaign hiccups – including when the Supreme Court ruled that official referendum information contravened campaign laws. She later introduced the Children First bill and established Tusla, the child and family agency. She was highly regarded by the groups and NGOs that proliferate in the area.

Colleagues in that often beleaguered Fine Gael-Labour coalition regarded her as a solid minister, but hardly a political star.

When Alan Shatter fell in 2014, Kenny was seeking a safe pair of hands as minister for justice, and it was to Fitzgerald he turned. She picked her way through the justice minefield carefully, and successfully. Where Shatter bound himself closely to Garda commissioner Martin Callinan – with ruinous consequences for him – Fitzgerald made it clear that she and Callinan’s successor Nóirín O’Sullivan would have a different relationship.

With every one of O’Sullivan’s frequent mishaps, Fitzgerald made it clearer and clearer that the force’s difficulties required action from the force itself; she wouldn’t be left holding the can for Garda misbehaviour. Privately, she was sceptical of everything the gardaí told her about past scandals and their efforts to address them. But publicly she continued to back the commissioner to the hilt. She pressed ahead with a programme of reforms of the gardaí, introducing a new oversight body, the Policing Authority. But deep problems remained with the culture of the gardaí.

Fitzgerald was reappointed minister for justice when Enda Kenny’s second government was formed, but the drip-drip of Garda scandal did not abate; if anything, it intensified. Fitzgerald increasingly relied on the Policing Authority and its chairwomen Josephine Fehily to seek answers from the force about its difficulties past and present.

By now she was Tánaiste, and when the Garda scandals claimed their biggest scalp – that of Kenny – Fitzgerald let it be known that she was interested in succeeding him as taoiseach. But Fine Gael was hungry for generational change, and Fitzgerald never commanded enough support in the parliamentary party to mount a serious bid.

She was still a big beast of the party, though, and when she declared for Leo Varadkar on the first weekend of the leadership campaign, it was a sign that the contest was as good as over almost as soon as it began. When Varadkar named his first Cabinet, Fitzgerald was kept as Tánaiste and moved from the troublesome justice portfolio to the plum portfolio of the business and enterprise department.

In the cacophony of gossip about jobs and positions that always hangs around Leinster House, she is rumoured to have designs on the presidency. And while the days of established politicians from the big parties having a head start in presidential elections may be over, Fitzgerald would be a formidable candidate. Though ultimately, that might depend on how the current controversy resolves itself.