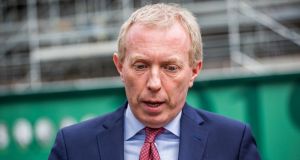 A senior Fianna Fáil frontbencher has apologised after admitting a colleague voted for him on a number of occasions while he was not in the Dáil.

Timmy Dooley, the party’s spokesman on communications, the environment and natural resources, was not in his seat during a time on Thursday when six electronic votes were recorded in his name.

Speaking to The Irish Times on Saturday, he said he understood his colleague Niall Collins, TD for Limerick and Fianna Fáil’s foreign affairs spokesman, voted on his behalf.

“I was present in the Dáil on Thursday and went to the chamber after the voting bell sounded,” he said.

“I left the chamber to take a phone call. I was made aware yesterday that my vote was recorded.

“I understand from Niall Collins, that under the mistaken belief that I was at the back of the chamber on the phone, he pressed my voting button.”

Mr Dooley, a TD for Clare, added: “I have spoken to the Ceann Comhairle today, to explain what happened and apologise for the misunderstanding.”

The Ceann Comhairle Seán O’Fearghail has asked the clerk of the Dáil to urgently prepare a report on the conduct of the votes.

In a statement on Saturday he said: “The integrity of the voting system in Dáil Éireann is of the utmost importance. As Ceann Comhairle, I have a duty to ensure that the public can have total confidence in the Dáil’s proceedings.

“Further to media reports on votes in the Dáil last Thursday 17 October 2019, I have asked the clerk of the Dáil to prepare a report on the conduct of the votes for my urgent attention”.

Mr Collins confirmed he voted for Mr Dooley on six occasions on Thursday, adding that he did so without being asked.

“I thought he was up the back of the chamber, in the lobby, on the phone up there, but when I checked it with him, he had actually exited the chamber,” he said.

Mr Collins said he wasn’t asked by Mr Dooley to vote for him.

Asked if he was allowed to vote for another TD with or without their permission, he said: “I don’t know the answer to that.”

“It’s not commonplace, but often someone might be taking a phone call or somebody might be having a conversation at the other side of the chamber and you might say to somebody ‘press the button’, or they might be sitting in the wrong seat,” he added.

A Fianna Fáil spokesman declined to comment on Mr Dooley being absent from his assigned seat during the electronic voting.

“That’s for Timmy at the moment,” said a Fianna Fáil spokesman.

“If you want to try get a hold of Timmy, you are welcome to. The party is not commenting either way at the moment.”

“Voting in the Dáil is very straightforward, as we are all assigned a seat from which we vote,” he said.

“The notion that any TD could be recorded as voting while absent from the chamber is very worrying.”

Mr Rock said voting on legislation is “one of the most important jobs of a TD” as well as “a responsibility and a privilege we bear as elected public representatives.”

Mr Dooley told the Irish Independent on Friday that there “must have been a mistake or something” and he didn’t know anything about it, adding that he would “try” to investigate the matter.

“I trust Deputy Dooley is in no doubt of the seriousness of this matter. There can be no question of impropriety ... this needs to be explained in full immediately and Fianna Fáil have not done so today.

“The right to vote in our parliament is a privilege and is central to our democracy,” he said.

TDs have a specific seat assigned to them so their electronic votes can be tracked.