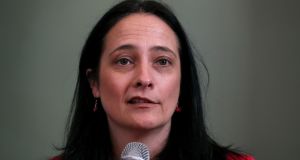 The Green Party’s proposal to form a national government to deal with coronavirus has been rejected by Fianna Fáil as a way of “making government less effective, not more”.

The suggestion was also given a cool reception by Fine Gael and Sinn Féin, whose leader Mary Lou McDonald said the existing regular meetings of all party leaders on Covid-19 were adequate.

After a meeting of its TDs in Leinster House, Eamon Ryan’s party said it was “calling on all parties to suspend discussions on forming a majority government and work towards forming a crisis national government to be reviewed in three months”.

“If we don’t get the consent of all the political parties to do that then we will meet again as a parliamentary party, but I would reckon we would continue then as is, where we would talk to everybody. We are not choosing.”

The move by the Greens, according to sources, reflects unease in the party on entering government with Fianna Fáil and Fine Gael.

The two Civil War parties will continue discussions on Thursday on a potential coalition. Between them they have 72 Dáil seats, eight short of a majority, and both want the 12 Green TDs, as well as Independents, to help to form a solid government

Some of the Independents open to entering government have said the Greens would need to be part of the arrangement even if a majority can be assembled with the support of non-party Deputies alone.

“There has to be four legs to it,” said one Independent TD. “This government is going to have to take some difficult decisions, and it needs more than a bare majority.”

A Fianna Fáil spokeswoman said: “A government with a majority that prioritises the country as it goes through what is now a global pandemic is what the country needs.

“National government is a way of making government less effective, not more. It sidelines parliament and turns government into the place where battles are fought, not where decisions are taken.”

A Fine Gael spokesman said: “We intend to continue discussions with the Green Party. However, decisions and choices may need to be made in the coming months that require a government with a working majority in the Dáil and Seanad, and which is able to function effectively.”