‘I’m a democrat, I listen to the people. I respect the decision of the people’ 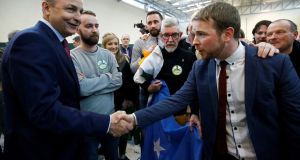 Fianna Fáil leader Micheál Martin has opened the door to entering government with either Sinn Féin or Fine Gael, saying he is a “democrat” who listens “to the people”.

During the election, Mr Martin ruled out sharing power with either Mary Lou McDonald or Leo Varadkar but on Sunday says he respects “the decision of the people”.

He was repeatedly asked if he will enter government with Sinn Féin and did not rule it out.

“I think we’ll let things calm down today,” he told RTÉ. “We’ll assess when the full count is in and the full number of seats are in. I’m a democrat, I listen to the people. I respect the decision of the people.”

During the campaign he also said he had a “moral” issue with Sinn Féin but now says the “fundamental issue” for him when negotiating government formation is the “policy platform”.

“That said, for any government to sustain, there has to be compatibility in terms of the programme for government. It has to be coherent and it has to be sustainable and deliverable. They’re very significant issues that can’t be glossed over in the euphoria of an election day and all of the tension, interest and excitement around it.

“So I think over the next number of days people will assess that situation in terms of such a policy platform. Obviously it also depends on the outcome of the election but I think the key issue for me is that the country must come first.”

Mar Martin said Ireland was now entering into “a different, fragmented political landscape which I think is going to make the formation of a government very difficult and I hope we don’t have a period of instability in the time ahead”.

“That’s something I think wouldn’t be in the best interests of the Irish people. For any government to sustain there has to be compatibility in the political programme of that government and also once policies and issues and principle and issues doesn’t change overnight and there are significant issues there but as I say over the next number of days we’ll tease those out with all concerned.

“Today is a day for election, the people have spoken today, I respect that and I just want to be very straight forward in saying there are very, very significant issues to be resolved and I think there will be difficulties and challenges ahead in terms of the formation of any government but a programme for government has to be sustainable and coherent for the full duration of that period for four to five years and that’s a very key litmus test and once policies and principles don’t change overnight.”

Mr Martin made no reference to Sinn Féin’s support for the Provisional IRA campaign of violence in Northern Ireland which he previously cited as one of the reasons why he would not lead Fianna Fáil into coalition with Sinn Féin.

Mr Martin looks on course to take the second seat in Cork South Central after Sinn Fein’s Donnchadh Ó Laoghaire looked set to top the poll while his running mate, Michael McGrath was course to join him in returning to the Dáil.

“I want to thank the voters of Cork South Central because it seems from the tallies that we will hold our two seats with in and around 35 per cent of the vote which given everything that is happening today is a very solid vote.

“We thank the people who have voted for myself and Michael McGrath for placing their trust in us and I thank all those who campaigned for me and for Michael - we have been a consistent duo now through thick and thin.”

1 Dig for remains of Red Hugh O’Donnell finds skull and coffins
2 Miriam Lord: Leo’s Phoenix pecs just a storm in a bag of cans
3 ‘I will be alone for rest of my life,’ says woman raped as she slept
4 Explainer: Did the Taoiseach ignore public health rules by going on a picnic?
5 Archaeologists are ‘quite sure’ they have found Red Hugh O’Donnell’s burial place
Real news has value SUBSCRIBE