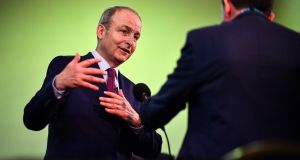 Micheál Martin: ‘This will not be an easy process, but it is a hugely important one.’ Photograph: Jeff J Mitchell/Getty

Fianna Fáil has said that government formation talks will move from informal contacts to a “more formal process of negotiation” ahead of the return of the Dáil on Thursday.

“This will not be an easy process, but it is a hugely important one. We will approach the process in a positive, calm and constructive way, as we work to deliver a change of government and a new approach in the areas of housing, health, cost of living and climate change,” Mr Martin said.

Sinn Féin held a series of meetings with smaller parties on Wednesday. Talks were held with the Green Party, Solidarity-People before Profit and Social Democrats as well as well as a number of independents.

The party was questioned on its plans for forming a government and also on the costings in its manifesto.

A source present at one of the meetings said the Sinn Féin negotiating team were still leaving the option of forming a government with Fianna Fáil open even though no talks between the two had happened yet.

Fianna Fáil has consistently said it will not go into government with Sinn Féin.

Kerry TDs Michael and Danny Healy-Rae also met Sinn Féin and said there were questions about how the party planned to fund the promises contained in its manifesto.

“A lot of the Sinn Féin policies, they sound fine, but it is who pays for it, where does the money come from. These are the very clear questions,” Michael Healy-Rae said.

He said he wanted to know “how exactly it will be financed”, adding that “there is no such thing as a free lunch”.

The Solidarity-People Before Profit group said it believed a left-led minority Government could work, and suggested it may not vote for Sinn Féin leader Mary Lou McDonald as taoiseach if she would not rule out working with Fianna Fáil.

People Before Profit TD Richard Boyd Barrett said: “We sent the same message to Sinn Féin that we intend to send to the Social Democrats. We intend to pursue a left government to give effect to the demands for change that were clearly made by the electorate and to radically drive through the changes we need.”

“They are keeping open the option of other arrangements that might include Fianna Fáil. For us, that it just not on. We certainly do not want our vote to be facilitating a return to power of Fianna Fáil or Fine Gael,” he said.

Fianna Fáil will also nominate Micheál Martin for the position of taoiseach, Fine Gael will nominate Leo Varadkar and the Green Party will nominate Eamon Ryan. It is expected that none will have the adequate numbers to be successful on Thursday.

Sinn Féin’s finance spokesman Pearse Doherty described discussions his party had on Wednesday with the secretary general of the Department of the Taoiseach as “productive”. The party will meet the Social Democrats on Thursday morning. The Social Democrats say they are still deciding which way to vote in relation to a potential taoiseach.

Labour is also expected to meet on Thursday morning to decide the same.