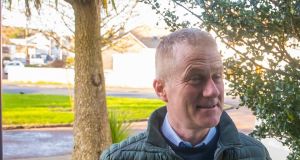 Cllr Eddie Mulligan canvassing in Waterford city. Mr Mulligan was a director and shareholder of Hype Hair Salon Ltd, which owed the Revenue €153,770.72 when it was placed in liquidation. Photograph: Patrick Browne

A Fianna Fáil general election candidate in Waterford, Cllr Eddie Mulligan, was disqualified by the High Court in 2017 from acting as a company director for seven years, because of his management of a family hair salon business.

Mr Mulligan was a director and shareholder of Hype Hair Salon Ltd, which owed the Revenue €153,770.72 when it was placed in liquidation in 2014.

The councillor would not say if he had told Fianna Fáil about the disqualification, but a spokesman for the party said it had not been made aware of it.

The spokesman said Mr Mulligan had confirmed he was tax-compliant prior to his selection as a general election candidate in 2018.

“We will be seeking an urgent explanation of the issues raised,” he said.

Details of the hair salon group’s management were cited in the 2017 annual report of the Office of the Director of Corporate Enforcement (ODCE). The report said the business, set up in 2005, was insolvent from when it began trading.

It said the directors – Mr Mulligan and his wife, Dervla – had not co–operated fully with the liquidator, and that the company made payments to other creditors while not in a position to pay its tax debts.

Mr Mulligan said he disputed the liquidator’s view that the business had been insolvent from when it started trading, but did not have the finances to fight the issue in the courts. “There was a lot of things there that I was disputing.”

The councillor was added to the party ticket in November 2018 and will run alongside Mary Butler TD, who said after the local elections in May that she did not think there were two seats for Fianna Fáil in the constituency.

Mr Mulligan told The Irish Times the financial problems of the salon business were “legacy” issues related to the recession.

“At the time, I and my wife were in difficulty like many other companies. It was a whole different world. We had provided employment in our business but it was very difficult.”

Mr Mulligan is a founding member of the Waterford Business Group, which was formed in 2013, and is comprised of retailers and other businesses from the city centre. He was elected to Waterford City and County Council in May 2014 as an Independent, and joined Fianna Fáil later that year.

The report also said that the Mulligans’ company had breached the Companies Act 2014 by failing to file statutory returns for the business to the Companies Registration Office.

5:30 Sourcing equipment to protect against coronavirus a major challenge - HSE