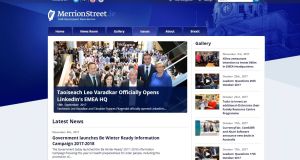 Fianna Fáil is to table new legislation requiring all online political advertisements to display who funded the advertisement and the audience targeted.

The party agreed to progress a Bill by TD James Lawless insisting all online political ads carry a transparency notice outlining the name and address of the person, company, organisation or entity that paid for the advertisement and who the intended market is.

If the entity is the State or an arm of the State, there will be a requirement to make that clear.

Mr Lawless said this was in response to “serious concerns” he has regarding the use of Merrionstreet.ie, a Government information website, by Taoiseach Leo Varadkar.

Mr Varadkar has featured in a number of videos on the website including information on Budget 2018, the Rugby World Cup, the back-to-school initiatives by the Government, and to highlight welfare reforms.

“The ads would probably have cost €100,000 and we are not clear on whether public money is being used in a partisan way.

“If so, the Taoiseach is breaking the law in spirit and in letter. This is about creating a level playing field for all.

“Information is important in politics but full disclosure is more important. We need to be transparent and up-front about this.”

The Bill would make it an offence to provide false and misleading information about where the funding has come from or to not fully disclose all details. On summary conviction it would be punishable by a fine of €500 or imprisonment for six months. On conviction, a fine of €10,000 or prison for five years would be in place.

Mr Lawless said social and online media is becoming increasingly relied upon for news and for political marketing.

Therefore transparency surrounding funding must become a priority, the Fianna Fáil TD said. He pointed to the use of Russian money in the US elections to create online adverts and how such ads reached 126 million voters.

The measure would also be applicable to referendum campaigns, where both sides of a campaign would have to make it clear who is funding their online ads.

The Bill also makes it an offence to knowingly use an internet bot, also known as a web robot, to create multiple online presences that are directed towards a political end. A person found guilty would face imprisonment for five years and a fine not exceeding €10,000 on conviction.

Fianna Fáil has agreed to support the measures and will progress the legislation next week.

Mr Lawless said: “Without knowing the source of the funding for electoral campaigns, voters can be defrauded in elections and referendums. This will seek full disclosure.

“Similar requirements are placed on posters and ensuring there is such transparency, the same should be applicable to online giants.”