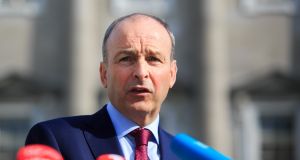 Fianna Fáil leader Micheál Martin: ‘There is an obligation on us to try and steer the country through crisis and on a pathway to recovery.’ Photograph: Gareth Chaney/Collins

The formulation of a framework document outlining how a coalition involving Fianna Fáil and Fine Gael could work may act as a “catalyst” for other parties to join such a government, Micheál Martin has said.

The Fianna Fáil leader also said in a series of interviews on Thursday that he hoped the Fine Gael-Fianna Fáil document will be agreed next week.

However, a statement released after a meeting of the Fine Gael parliamentary party said: “It will take several weeks before any potential government involving Fine Gael can be formed, given the need to secure a third party to act as a third pillar of Government and the need then for all parties to seek ratification of their party memberships.”

The two Civil War parties exchanged papers this week and are expected to meet again early next week before approaching other, smaller parties and Independents about supporting a new government.

Fianna Fáil has 37 Dáil seats and Fine Gael has 35 but, between them, they are eight short of a majority in the Dáil. Both are seeking the support of Independent deputies but Taoiseach Leo Varadkar has said that a third party is needed, in addition to the Independents, in order to provide stable government.

The Green Party is continuing with its position that a national unity government should be formed to tackle the coronavirus crisis, while the Social Democrats have said that a government with both Fianna Fáil and Fine Gael would not be compatible with their policies.

Labour TDs earlier this week reiterated their desire to go into opposition and the party will on Friday announce who will win the leadership contest to succeed Brendan Howlin: Alan Kelly or Aodhán Ó Ríordáin.

Mr Martin said that “the putting together of a document in itself would act as a catalyst”. He said the Independent deputies who told the two Civil War parties to formulate a document first were correct.

“And it would have to be for five years in because the decisions that are necessary would be tough decisions and challenges.”

Mr Martin also said that the Dáil may not meet again to elect a taoiseach until later this month, but would not be drawn on whether he or Mr Varadkar would hold the office first in a coalition.

Mr Varadkar last night said that a third party is required to join Fianna Fáil and Fine Gael, but said almost all the time he and his ministers have at present is spent dealing with the coronavirus crisis.

“We need a third party. We can absolutely work with Independents as we did for the past four years, very successfully.”

He said a government that relies on nine or the Independents in every vote “isn’t one that’s going to be stable” or wouldn’t be stable enough to make “the tough decisions and hard calls”.

He also said a “broad base” would be needed to guide the country through the coming years, adding that Fianna Fáil and Fine Gael only got about 40 per cent of the vote between them.

“That’s not enough. I think we need a broader base than that, to have the legitimacy and have the authority to govern the country well.”