FG will not take party position on gay marriage 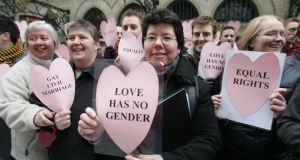 Members of the LGBT community in Dublin. Young Fine Gael as well as the party’s LGBT and Trinity College wings have expressed their support for the introduction of gay marriage in Ireland. Photograph: Alan Betson

Fine Gael will not take a party position on gay marriage when the issue comes up for debate at the Constitutional Convention next weekend.

Three groups within Fine Gael have made submissions in favour of changing the Constitution to extend marriage rights to same-sex couples, but in the absence of an official policy stance, the party has decided that its 12 representatives should be allowed to vote as they wish.

The marriage debate has drawn the biggest public response of any issue at the convention to date, with more than 1,000 individuals and groups having made submissions.

The Catholic bishops have strongly opposed the proposal and have said they would refuse to carry out the civil element of marriage if the reform was introduced. The convention has also received submissions against gay marriage from the Order of the Knights of Columbanus; the Iona Institute, a religious advocacy group; and Evangelical Alliance Ireland.

Fine Gael, the only major party that has not endorsed gay marriage, has not made its own submission, but Young Fine Gael as well as the party’s LGBT and Trinity College wings have expressed their support for the idea.

The chair of the party’s delegation at the convention, Charlie Flanagan TD, said they had received submissions as a group but had not “as yet formulated a whipped position.”

“It’s unlikely we will have a whip imposed. Rather our members will engage with the citizens over the weekend without having a disciplined position,” he said. This was later reiterated by a party spokeswoman, who said Fine Gael members would be “free to vote according to their wishes following engagement, deliberation and discussion with all other members of the convention”.

Several members of the Fine Gael delegation, the largest at the convention, have expressed support for same-sex marriage. “I’ll be supporting the proposition that we hold a referendum on same-sex marriage,” said Cork TD Jerry Buttimer.

Regina Doherty, a Fine Gael’s TD for Meath East, said she was “very much in favour of marriage equality” and would vote for it, while Mr Flanagan said he was on record as being in favour but would decide how to vote after next weekend’s deliberations. Two other members of the party’s delegation, TDs James Bannon and Terence Flanagan, said they would decide how to vote after discussions with other participants.

“I am entering it with an open mind and will listen to all sides, and hopefully the debate will give me sufficient information from which to make an informed decision when it comes to voting,” the latter said.

In its submission, the Catholic Bishops Conference pointed out that in Ireland, church and State co-operated closely in the solemnisation of marriages, and that in more than 70 per cent of marriages, religious and civil elements took place in the same church ceremony.

“Any change to the definition of marriage would create great difficulties and in the light of this if there were two totally different definitions of marriage the church could no longer carry out the civil element,” it added.

Among the groups that made submissions in favour were the Equality Authority, Amnesty International Ireland and the Irish Council for Civil Liberties.

Gay marriage is one of a series of proposed constitutional changes the 100-member convention is considering this year.