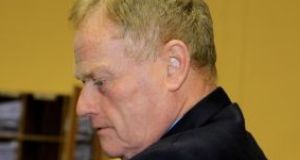 Fine Gael’s James Bannon has had a tough election campaign.

Good news about the success of the planning permission for a €233 million infrastructural project he and Labour’s Willie Penrose had “nurtured” came too late to save his seat.

Centre Parcs, the specialist forest-based holiday villages leisure company, had sought planning permission to built a holiday village in the constituency but the decision to grant it was only announced on the evening of the election and only became public knowledge on Monday.

“We were delivering probably the biggest infrastructural project in the region of €233 million to our backgardens,” said Mr Bannon. Every town in Longford-Roscommon would benefit.

“People started to doubt that the project would get planning permission.” He believes “it would have given us 1 per cent or 2 per cent that we needed. But how and ever that’s history now”.

He may be disappointed by the delayed planning permission but he is deeply hurt by a negative social media campaign against both Government TDs.

“We were part of decent, honest-to -God campaigns when we started out. It was on policy, not on personality,” Mr Bannon said.

He found it “very, very hurtful”.

Mr Penrose said “people seem to think they have a licence to say what they like and you’ve no recourse by the looks of things”.

He does not engage on social media. “As far as I’m concerned you go out and sell yourself.”

“But they shouldn’t be free to make any sort of adverse comment that comes into their head, sometimes in the early hours of the morning and they’re faceless at that.”

Social media had changed things, said Mr Penrose, “but I don’t think it’s changed for the better... the way people feel free to utter condemnation and abuse of all kinds against people who go out there and do their best”.

The two men spoke to reporters as they sat together in the early hours of Thursday morning, waiting for the result in the six-day marathon recount that would decide which of them would be eliminated from the race.

In the end it was Mr Bannon, six votes behind his Government colleague.

But they belied the image of opponents. “We know one another, we’re friends and don’t see each other as rivals,” said Mr Penrose. “We live on each side of the River Inny.”

“It has been very distressful, very difficult. It’s an emotional time. But at the end of the day James would be like myself, we’d be realists. We’d realise that nobody has died. That’s the vagaries of the PR system.”

“I was probably a little bit more resigned than James because I had made up my mind on Saturday night that I had no chance of getting elected.”

And after six days of waiting, had it induced any affection for electronic voting?

Mr Penrose, who thought he was a political goner on Saturday night and was back Lazarus-like on Sunday, loves the drama of it all.

“There would be resistance among the Irish public” if there was a move again to electronic voting.

He quips: “And political anoraks and nerds would obviously disappear off the face of the earth if this system was changed.”

If he was not part of the electoral process “I’d probably enjoy it more myself”, he adds.

“There’s something very, very peculiarly Irish about this system. We’ve adhered to it and governments over the years have tried to change the PR system. They didn’t succeed.”

“In the British system you’d know after two hours. Here you wouldn’t know after a week,” and Mr Penrose was happy enough about that.

“There’s nothing better than watching the votes being distributed, how they’re distributed how a number 14 can become a number one if you survive long enough to achieve that.”

Mr Bannon has not made up his mind on the issue of electronic voting.

“I don’t know,” he said. But he would like a move from multi-seat constituencies. “I would prefer single seat constituencies based on proportional representation. I feel it would give us a more stable government going forward.”