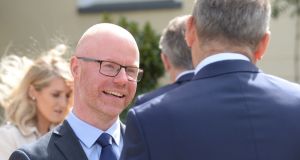 Fianna Fáil health spokesman Stephen Donnelly submitted the amendment “solely with the intention of protecting the implementation of the Bill and recognising the role of the Irish language”. File photograph: Dara Mac Dónaill/The Irish Times

Fianna Fáil will withdraw an amendment to controversial legislation requiring health warnings to be listed on alcohol products in Irish as well as English if there is a “genuine risk” to implementation of the Bill.

Party health spokesman Stephen Donnelly said he had submitted an amendment to the Public Health (Alcohol) Bill, which aims to improve drinking habits in Ireland, “solely with the intention of protecting the implementation of the Bill and recognising the role of the Irish language”.

Mr Donnelly said: “I have discussed with Minister [for Health Simon] Harris potential concerns with regard to the Bill being delayed.

“If having debated this further with him in the Dáil there is a genuine risk to implementation then I will withdraw the amendment.”

Public health advocates have expressed concern that the amendment will require notification to the European Commission if passed, because it is a strengthening of the measure and the EU will have to consider whether it constitutes a barrier to trade.

The notification will require a minimum three-month automatic standstill on the Bill, which has already spent almost three years going through the Oireachtas.

Mr Donnelly said he believed that not having the warnings in Irish “opens the Bill up to legal challenge”, pointing to a successful High Court challenge and ruling that health warnings on tobacco products must also be in Irish.

The amendment is one of a series from Opposition TDs for the final stage of debate on the legislation, which are to be debated in the Dáil on Wednesday.

The Bill introduces minimum unit pricing, separation of the display of alcohol from other products in supermarkets and other retail outlets, a 9pm broadcasting “watershed” for advertising; as well as detailed labelling requirements including ingredients, energy (calories) and health warnings.

Thirteen TDs including Independents and other members of Fianna Fáil and Fine Gael have also submitted amendments opposing elements of the label and advertising warnings.

Sinn Féin has said it will consider the Irish language amendment. The party’s health spokeswoman Louise O’Reilly said Sinn Féin “wouldn’t be caught on the wrong side of a debate about Irish”.

She said “it’s a very good idea” to have health warnings in Irish and believed it was possible to come up with a solution that would not delay the legislation because “every day, every week and every month” people are dying because of alcohol.

She stressed the party’s “absolute commitment” to the passage of the legislation without further delay, but expressed cynicism about Fianna Fáil’s interest and said “if they have a new found love for Irish that’s fantastic”.

The cancer warnings will also be required on all advertising and in pubs and restaurants where alcohol is served in glasses without the warnings on them.