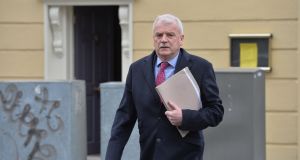 Several prominent politicians, including Ministers and party leaders, have declined invitations to attend the US embassy’s celebration of American independence day on Tuesday evening to signal their opposition to the policies of the Trump administration.

Junior Ministers Finian McGrath and John Halligan both said on Monday they had declined the invitations from the embassy in Dublin.

Mr McGrath, who sits at Cabinet as super-junior Minister for Disabilities, said he would have “major concerns about going to the Fourth of July event”, which takes place this evening in the ambassador’s residence in the Phoenix Park, and was traditionally attended by large numbers of politicians of all parties.

“I wouldn’t feel comfortable wining and dining there,” Mr McGrath said, citing concerns about the Trump administration’s attitude to the treatment of Palestinians and the recent controversy over the US separation of illegal immigrants from their children.

A spokeswoman for the leader of the Labour Party, Brendan Howlin, confirmed he would not be attending. He had decided not to attend before the recent controversy over the children of migrants, his office said.

A spokeswoman for the co-leaders of the Social Democrats, Róisín Shortall and Catherine Murphy, said that both had been invited, but neither would be going. She said the issue about which they were most concerned was the separation of immigrant children from their parents at the US border.

Sinn Féin did not respond to queries about leader Mary Lou McDonald’s attendance at the event.

Fianna Fáil leader Micheál Martin is “hoping to attend”, his spokesman said, but must first attend a meeting of his parliamentary party at Leinster House.

A Fine Gael spokesman said TDs had not been offered any guidance on the event.

A spokesman for the Minister for Children Katherine Zappone (who is originally from the US) said she would not be attending as she has Dáil and constituency business on Tuesday evening.

Ireland has been without a US ambassador since Donald Trump came to office at the beginning of 2017 and dismissed all Obama administration appointees. The Department of Foreign Affairs does not expect an appointment this year.

In the American system the embassies are staffed by civil servants from the State Department, but the ambassador is a political appointment which usually goes to supporters and fundraisers for the incumbent president. In the absence of an ambassador in the embassy in Ballsbridge, the event on Tuesday is being hosted by Reece Smyth, the deputy chief of the US mission.

A spokesman for the US embassy declined to comment on any acceptances or refusals. However, he said that “in general our acceptance rate is in line with previous years, if not a little higher”.