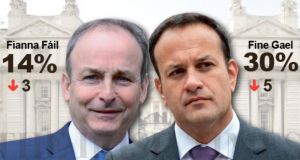 Public confidence in the Government’s management of the pandemic has slumped since last autumn, the latest Irish Times/Ipsos MRBI reveals, while party support for both Fianna Fáil and Fine Gael has fallen.

More than half of voters say that the Government is “not doing a good job” handling the pandemic, while Taoiseach Micheál Martin and the Minister for Health Stephen Donnelly both receive unfavourable ratings from a majority of voters for their performance on Covid-19.

The personal rating of Tánaiste Leo Varadkar, meanwhile, has slumped by 13 points, though he is still the most popular of the party leaders.

On individual leaders, just 39 per cent of voters said Mr Martin was doing a good job handling the pandemic, with 56 per cent saying he was doing a bad job.

Half of voters (50 per cent) say Mr Varadkar is doing a good job on the pandemic, with 45 per cent disagreeing. By far the highest rating is for the chief medical officer Dr Tony Holohan, with 83 per cent of respondents saying he is doing a good job, against just 13 per cent to who say the opposite.

The party support figures show declines for both of the large coalition parties, with Fianna Fail dropping by three points to 14 per cent, and Fine Gael dropping by five points since the October poll to 30 per cent today. There is better news for the Green Party, however, which sees a marginal recovery of two points to six per cent, almost reaching its General Election level of seven per cent.

Despite the aggregate slump for the coalition parties however, there are no gains for the main Opposition party, with Sinn Féin seeing a marginal decline of one point to 28 per cent.

Instead, the benefits flow to the Independents and smaller parties, which see their aggregate support jump by eight points to 19 per cent.

There is a jump in the number of undecided voters, from 18 per cent in October to 23 per cent today.

Government satisfaction declines by five points to 43 per cent, while Mr Martin’s approval rating rises slightly, from 39 per cent to 42 per cent.

Mr Varadkar tumbles from 65 per cent in October to 52 per cent today, while Green Party leader Eamon Ryan sees his rating jump from 27 per cent to 35 per cent. The Sinn Féin leader Mary Lou McDonald slips marginally by a point, to 45 per cent.

The poll was taken on Monday (February 22nd) and (February 23rd) Tuesday of this week, with researchers interviewing 1,200 adults by telephone. A return to telephone sampling was necessitated by pandemic restrictions, while the October poll used face-to-face interviewing.

The accuracy level is estimated at plus or minus 2.8 per cent.