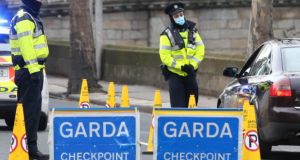 The first steps to a wider reopening of society from lockdown could begin at the start of April rather than later in the month if the advice from Nphet on the metrics is favourable. File photograph: Stephen Collins/Collins Photos

Taoiseach Micheál Martin has indicated for the first time that Level 5 restrictions on outdoor activity, sport, construction and remaining within 5km of home could be eased on Easter Monday, April 5th.

In what was received as a move to provide a tangible date, Mr Martin told the Fianna Fáil parliamentary party on Wednesday night that those four areas would be examined before Easter, in tandem with the National Public Health Emergency Team (Nphet).

The clarification on this issue means if the advice from Nphet on the metrics were favourable, the first steps to a wider reopening of society from lockdown would commence at the beginning of April rather than later in the month.

While the new Government plan unveiled on Monday did mention the April 5th date in the context of outdoor activities and the 5km rule, it gave no clarity on whether it was a date for change or for a review to commence.

Meanwhile, a number of Fianna Fáil TDs at the meeting contended the distribution of Covid-19 vaccines across the State had been uneven and inconsistent and led to widespread confusion.

Deputies from Mayo, Kildare, Dublin and Limerick complained that vaccines were not being distributed in a uniform way and GPs were becomingly increasingly frustrated by the lack of information on when they would receive their supplies.

Mayo TD Dara Calleary told the meeting the rollout of the vaccination programme in Mayo had been “all over the place” with some practices receiving no supplies while others received far too much for their needs.

According to colleagues who attended the meeting, Mr Calleary instanced his own home town of Ballina where three practices received a supply of vaccines and three did not.

He told the meeting it seemed the Irish Medical Organisation had a coordinating role.

He said the model would need to be looked at as he would be concerned if the situation was not addressed before the distribution programme is ramped up April, from 100,000 per week doses nationwide to 250,000 per week.

In an indication of problems with vaccine distribution in Mayo, Belmullet GP Dr Keith Swanick tweeted earlier on Wednesday that “a practice in a neighbouring village received 420 Covid vaccines last week instead of 42. Myself and the other practice in Belmullet still await our allocation. Our patients are being disenfranchised. Who’s in charge of this process. We need answers?”

Limerick TD Niall Collins said he was aware of practices which had yet to receive their supplies and could get no information on when they would receive them, despite numerous phone calls.

Similarly, colleagues said Kildare North TD James Lawless had also raised the issue, criticising the uneven nature of the distribution and the dearth of information.

Minister for Health Stephen Donnelly said that he had contacted the HSE during the course of the meeting to ascertain what the issues and hold-ups were. He told colleagues he would revert to them as soon as he received the information.

Also at the the meeting, the Cork South West TD Christopher O’Sullivan proposed a €100 State hospitality voucher for over-65s once restrictions are lifted. Sligo TD Marc MacSharry also argued that increasing the period between the first and second jabs of the Pfizer and Moderna vaccines would allow more people to receive their first vaccine.

Senator Timmy Dooley and his Clare colleague Cathal Crowe tabled a motion that was directed at saving rural post offices.

Earlier, at the Fine Gael parliamentary party, meeting, attendees were warned that the public was losing confidence in the Government and would not put up with the current Coalition much longer.

Former minister for rural affairs Michael Ring delivered a stinging criticism of the Government’s handling of the pandemic and told his party on Wednesday night that people are “sick and tired of us”.

Sources at the meeting said Mr Ring said the Government had failed on testing, vaccines and communications. He warned that people had lost confidence in the Government, it is understood.

The public is losing hope, which is a problem, he told the meeting.

Party leader and Tánaiste Leo Varadkar told the meeting recent criticisms of the Government’s communications around Covid-19 were “justified” and would be taken on board.

The Government this week unveiled a refreshed framework for living with Covid-19,The Path Ahead. But the days preceding its launch were marked by confusion around what restrictions would be lifted and when.

The Fine Gael meeting heard claims that gardaí are being abused at coronavirus checkpoints and that the some members of the public are breaking restrictions out of frustration with the Government.

Sources at the meeting indicated former minister for housing Eoghan Murphy said people are breaking restrictions with a different “intent” than previously as if to say, “Government be damned”. He is understood to have warned that the next six weeks will be marked by frustration from the public.

The “lack of metrics” in the new plan were also described as “disappointing” by Mr Murphy. He also said the move to mass antigen testing could also be a game-changer, according to sources.

Limerick TD and Minister of State Patrick O’Donovan also said that a “whole of Government” strategy is needed for communicating issues around Covid-19.

He also spoke about the vaccination programme and called on Fine Gael to “make more noise” at a European level to ensure a greater supply of vaccines.