State must not force doctors to act against conscience on abortion

William Binchy: No medical professional should be made to play any role in termination process 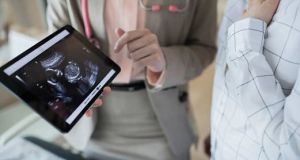 “Abortion on demand is about advancing the norm of choice to terminate life, not healthcare. What is a general practitioner who recognises the deep injustice of abortion on demand to do?” File photograph: Getty Images

With the repeal of the Eighth Amendment, the Oireachtas now has the awesome power of life and death over unborn children. The Government has expressed the intention to introduce legislation providing for abortion during the first 12 weeks of pregnancy, with no requirement for there to be any stated reason. The moral character of the intentional taking of innocent human life has not been changed by the profound legal transformation brought about by repeal. Making an action legal does not make it right.

Abortion on demand is about advancing the norm of choice to terminate life, not healthcare. What is a general practitioner who recognises the deep injustice of abortion on demand to do? A humane legal system, respectful of freedom of conscience, would ensure that the general practitioner should not be required by law to engage in conduct inconsistent with the Hippocratic Oath fashioned well over two millennia ago. It was clear to doctors then that the vocation of the medical profession is to heal, not to kill or to assist indirectly in the killing of human beings.

It is profoundly unjust, and disrespectful of doctors’ freedom of conscience, to require their active involvement in the termination of babies’ lives

Doctors internationally can be faced with important challenges when practising medicine. They may find that the law authorises acts that are unjust, discriminatory or inhumane: for example, female genital mutilation (as in certain countries in the Middle East and Africa) or inhumane treatment of terrorist suspects (as, sadly, was the position in the United States in the aftermath of 9/11). The fact that aspects of the procedure may involve healthcare does not change the position.

In cases of pregnancy, doctors have two patients, not one. Even if the mother denies the fact that her unborn baby is a human being, or wishes, regardless, to end the life of the baby in the first 12 weeks of his or her life, the doctor cannot deny the true reality. No doctor should have to be implicated in the killing of an innocent child for no stated reason.

Yet Head No 15 of the Government’s general scheme of abortion legislation would place an obligation on medical practitioners who have a conscientious objection to abortions of this kind, nonetheless, to “make such arrangements for the transfer of care of the pregnant woman concerned as may be necessary to enable the woman to avail of the termination of pregnancy concerned”. It is profoundly unjust, and disrespectful of doctors’ freedom of conscience, to require their active involvement in the termination of babies’ lives.

Some advocates for abortion welcome the narrowest of restrictions on conscientious objection to abortion, or even its complete abolition

Nor is there any need to do so. The Government is perfectly free to set up as elaborate and comprehensive a system of information and abortion provision as it wishes. In doing so, it does not have to subvert the remaining ethical foundations on which medical care is based. The responsibility for delivering the abortion regime favoured by the Government should not rest on those whose consciences are oriented towards healing patients rather than taking their lives.

The Government’s insistence on placing the burden on general practitioners to deliver its core policy on abortion is unprecedented internationally. There are real medical concerns about this approach, which have to be addressed. The reality is that, in Ireland, as throughout the world, some doctors will be willing to carry out abortions or provide assistance to the process; others cannot in good conscience be involved. It is better to recognise this at the beginning rather than set out on a course that inevitably will have to be altered.

Some advocates for abortion welcome the narrowest of restrictions on conscientious objection to abortion, or even its complete abolition, as in Sweden, Finland and Iceland. They regard this as part of a cultural agenda of changing attitudes to abortion. But it comes at a high price. Apart from the injustice to unborn babies, whose humanity becomes further occluded, it is damaging to the medical profession and to wider society. Society is harmed where doctors lose the ability to empathise with the flesh-and-blood reality of the human being who needs their protection and care.

Rather than force the participation of doctors with a conscientious objection, the Government has the opportunity to fashion a scheme that does not require them to engage in the process. If the Government refuses to do this, it is hard not to discern a wider agenda on its part.