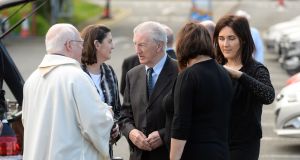 Bob Barnes, with family members at the funeral of his wife former TD, Senator and member of the Council of State, Monica Barnes. Photograph: Dara Mac Dónaill/The Irish Times

Former Fine Gael senator and TD Monica Barnes was described as “open and optimistic’’ by her daughter, Sarah, at her funeral in Killiney, Co Dublin.

Sarah Barnes spoke on Tuesday of growing up in a household where her feminist mother was a political and social activist, marching in many marches and becoming familiar with the outsides of embassies.

“It was fun and it was different,’’ she said.

Ms Barnes died unexpectedly on Tuesday last week, aged 82 years. Although she retired from the Dáil in 2002, she retained her interest in social causes and intended campaigning for the repeal of the Eight Amendment to the Constitution in the abortion referendum.

Sarah Barnes said her mother had said, towards the end of her life, she would “categorically’’ do it all again.

“She had a fantastic life,’’ she added.

She spoke of how her mother had passed away quietly in her favourite part of the house, the conservatory.

She said she believed that her brother, Paul, who had predeceased Ms Barnes, had come for his mother.

She said she was grateful there was no lingering with pain on her mother’s part.

The Mass was celebrated in the Church of Our Lady of Good Counsel, Churchview Road, by Fr John Sinnot PP. The soloist was Joanne Harding and the organist Tom Kehoe.

Symbols of her life brought to the altar included a selection of books from poets Patrick Kavanagh and Seamus Heaney and novelist John McGahern.

There were also a globe which was presented to her in 1992 by the Global Forum of Women, a Nealon’s Guide to the 24th Dáil and Seanad and a book of crosswords which she recently completed.

The chief mourners were her husband, Bob, daughters Sarah and Joanne, sister Angela and brother Colm, grandchildren and extended family.

Ms Barnes’s remains were taken from the church, to the strains of the recessional hymn, In the Arms of an Angel, and later cremated at Mount Jerome crematorium.