More than 90% of Irish people want to stay in EU, poll reveals 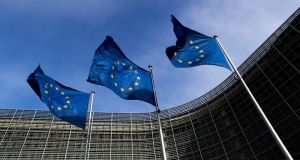 Just one in nine voters say Ireland should quit the EU, down from nearly three times that level five years ago, a new poll for the European Movement in Ireland has found. Photograph: Yves Herman

The number of those who believe Ireland should follow the United Kingdom out of the European Union has shown a sharp and continuing decline.

Just one in nine voters say Ireland should quit the EU, down from nearly three times that level five years ago, a new poll for the European Movement in Ireland has found.

While 29 per cent believed in 2013 Ireland should leave the union if the UK left, the figure is down now to 11 per cent – apparently in reaction to the experience of Brexit.

Ninety two per cent of those surveyed – 96 per cent in Dublin – now say Ireland should stay in. Support is greatest in Dublin (96 per cent) and among 18-24 year olds (97 per cent).

The phone poll of 1,000 citizens over 18 was conducted by Red C between March 15th and 21st for the European Movement.

It found a slight increase in support in the last year for Irish engagement in EU military and defence structures – up 2 percentage points to 59 per cent.

Ireland signed up in December to involvement in enhanced EU defence co-operation (Pesco) and it seems clear that citizens do not regard this as a incompatible with Irish neutrality for which strong continuing support is manifest in other polls.

The poll also found a willingness to pay a price for Brexit and the loss of the UK budget contribution to the EU, with 58 per cent supporting the Taoiseach’s willingness to see Ireland pay more into the next EU budget.

Seventy three per cent said that the UK should remain part of the customs union and single market. Those surveyed were evenly divided – 44 to 44 per cent- over whether they thought Brexit made a united Ireland more or less likely. Those under 35 years of age (54 per cent) are most inclined to say that Brexit makes a united Ireland more likely, while in the over-35s category only 39 per cent agree that it is more likely.