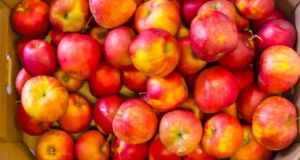 Opponents of Brexit say the government’s position on EU withdrawal has resulted in fruit and vegetables being left to rot for lack of workers to pick them. Photograph: Getty Images

Britain’s horticulture farms suffered a 12.5 per cent shortfall in seasonal workers in 2017 as numbers coming from continental Europe fell, it has been revealed.

The first full year following the Brexit referendum was the first time since the National Farmers Union began compiling figures in 2014 that growers were unable to recruit sufficient workers.

Opponents of Brexit said the figures proved that the government’s position on EU withdrawal had resulted in fruit and vegetables being left to rot for lack of workers to pick them.

The NFU’s labour survey for December 2017 showed a shortfall of 15.6 per cent in the number of seasonal workers in the horticultural sector that month, bringing the average over the course of the year to 12.5 per cent.

The worst month was September, when growers reported a 29.3 per cent shortage at a time when many crops are being harvested.

Almost 67 per cent of seasonal workers were from Romania and Bulgaria, with 32 per cent from eight other EU countries in eastern and central Europe.

Fewer than 1 per cent of the seasonal workers carrying out jobs such as fruit-picking were UK nationals – 169 individuals in the survey.

NFU deputy president Minette Batters said: “It is clear that solutions are still needed to ensure that farmers and growers have access to sufficient numbers of workers for both forthcoming seasons and post-Brexit.

“Access to both seasonal and permanent workers is crucial across all farming sectors, and they are incredibly important to ensuring farmers can continue producing food to feed the nation.

“The NFU’s survey of labour providers shows that the availability of workers continues to tighten, and I would urge government to find a solution for the whole industry that ensures it has access to the people it needs.”

Green MP Caroline Lucas, a leading supporter of the Open Britain campaign for close ties with the EU, said: “The government’s zealotry on Brexit and immigration is leading to a crisis in the British fruit industry. Fruit and veg is literally being left to rot in the fields because workers from the EU are increasingly unwilling to work here thanks to Brexit.”

She said the “minuscule” proportion of seasonal farm workers being recruited in the UK showed that it was “wishful thinking” to believe that local employees could fill the gap left by absent EU nationals. – PA