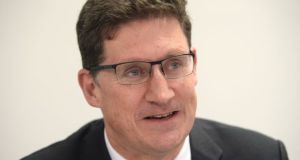 Minister for the Environment and Climate Eamon Ryan announced early last month that he expected the revised Bill to receive Cabinet approval by end of February. Photograph: Dara Mac Donaill

Friends of the Earth has accused Fine Gael of holding up the Climate Action Bill amid indications of a delay in publication of the revised version of the Government’s flagship environmental legislation.

Minister for the Environment and Climate Eamon Ryan announced early last month that he expected the revised Bill to receive Cabinet approval by end of February, and preparations were in train for it to be launched with public consultation on how best to cut polluting emissions.

“Campaigners are concerned the delay signals a late effort to water down the proposed law in light of comments by a number of Fine Gael TDs,” said Friends of the Earth director Oisín Coghlan.

Fine Gael’s climate action spokesman Alan Farrell rejected the accusation it was stalling the Bill. Some “concerns” and “small queries” had been raised but to say this was an attempt to dilute the Bill “is unfair”, he said.

A Fine Gael source told The Irish Times the party was happy with the Bill, including the move to introduce carbon budgets, and there was no reason it should not go on to second stage.

“Significant amendments were introduced by the Green Party last week, which have to be worked through” but there was no attempt to dilute the Bill, which, the party source added, was first introduced by former climate minister Richard Bruton.

A spokeswoman for Mr Ryan said: “The amendments to the Climate Bill are currently being finalised and the Bill will be brought back to Government shortly. There is an urgency to this, as the first five-year carbon budget includes 2021. It is important that the Bill reflects the cross-party consensus which has been a feature of the debate on climate action to date.’’

Sources in Fine Gael said it would have to go the parliamentary parties “if anything goes beyond or contrary to the programme for government”.

Mr Coghlan said“Climate Bill hesitancy” was evident in some quarters of Fine Gael from the public hearings of the Oireachtas climate committee, and also from meetings between local constituents and their TDs.

“Fine Gael representatives express reluctance on two issues. One is whether the programme for government commitment to cut climate-polluting emissions by 51 per cent by 2030 should be directly reflected in the Climate Bill.”

The other Fine Gael concern, he believed, was with “justiciability” – what could the Government be brought to court over. Mr Bruton raised this during the hearings, Mr Coughlan noted.

Mr Farrell, a member of the climate committee, said he had been advised of some concerns raised among the three party leaders, although he was “not in the room”.

What the Bill was trying to achieve was excellent but there were some concerns about “achievability” of some measures, he said.

Mr Coghlan expressed concern at the lack of urgency in the Government. “I think they are misunderstanding the risks here. The Government was already brought to court under the existing climate law and the state’s 2017 climate plan was quashed as inadequate by the Supreme Court.

“It would be foolish to pass a new law with a ‘PS’ that says ‘by the way you can’t take us to court if we break this law’. That would fool nobody, and satisfy nobody,” he said.

The “best way, and only way”, for the Government to avoid ending up in court in years ahead was to cut emissions in line with national and international obligations; “they should get on with it, rather than trying to get out of it,” he said.