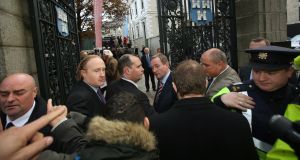 Taoiseach Enda Kenny was at the centre of more water protest skirmishes in Dublin yesterday as video footage emerged clearly showing Tánaiste Joan Burton being struck on the face a day earlier.

She was hit by a water balloon thrown from close range as she was being escorted from a graduation ceremony for students in Jobstown on Saturday.

The Tánaiste was shaken by the blow and was subsequently trapped in her car for over two hours as protesters banged on the roof and windows and shouted abuse at her.

Protesters and gardaí clashed outside the Mansion House in Dublin yesterday, where Taoiseach Enda Kenny was attending a function.

About 50 demonstrators gathered outside the Lord Mayor’s residence as the Taoiseach arrived and left. As he entered, Mr Kenny would only say of the anti-water charge protests: “I’m used to it.”

On the way out, when asked again about protests and the incident in which Ms Burton was trapped, Mr Kenny said: “Well it’s not about water, is it?”

Socialist TD Paul Murphy, one of the leaders of the demonstration in Jobstown, maintained the demonstration there had been peaceful, and it was a legitimate form of protest to keep Ms Burton trapped in her car for more than two hours.

Mr Murphy said he would support a similar-type protest in the future. “I wouldn’t have a problem if a sit-down protest developed again in the future and the Minister was detained for a couple of hours.”

Mr Murphy also accused the Tánaiste of “engaging in personal insults” against him for pointing out that he had attended a fee-paying private school.

Independent Senator Katherine Zappone, who was there, said there was “an air of intimidation and menace”.

Minister for Health Leo Varadkar said the protest in Jobstown “saw behaviour of the worst kind”.

“There are reports of intimidation, aggression, sexist remarks and abuse of the gardaí who were trying to keep the peace. Essentially, a happy graduation day was hijacked.”

It is expected the Government will agree tomorrow on a simplified system of water charges which will mean an effective annual charge of less than €200 per household.

The Coalition parties are hoping the package with reduced charges will be enough to encourage a majority of households to register with Irish Water and end the crisis.

Under the scheme, every household which registers with Irish Water and gives details to the Department of Social Protection will be entitled to an annual rebate of about €100.

This payment will be available to all compliant households irrespective of means. It will replace the tax concession in the budget and other allowances.

There will also be a simpler charging model, based on two rates. The first rate of €176 a year will be for a single-adult household, and the second €278 rate for a household of two adults or more.