Election 2020: Eight things we learned from the campaign and the results 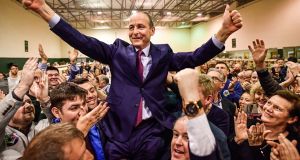 Micheál Martin of Fianna Fáil after being elected to the 33rd Dáil for the Cork South-Central constituency. Photograph: Jeff J Mitchell/Getty Images

The Fianna Fáil leader Micheál Martin hoped that he could walk a delicate line between opposing the Fine Gael-led government and facilitating it to perform vital national tasks like setting a budget and negotiating Brexit. Voters did not appreciate this subtle distinction. They lumped Fianna Fáil in with an unpopular government, and treated the party’s candidates accordingly.

Leo Varadkar’s offer of a grand coalition to Fianna Fáil near the start of the campaign further emphasised the point to many voters. One consequence was that Fine Gael and Fianna Fáil candidates couldn’t buy a transfer in the latter stages of many counts – except from each other.

Before the election, another confidence-and-supply agreement was widely considered to be one of the options for government that would be on the table when it came to government formation. Any of the big parties would think twice about doing it now.

2 Shift to the left

The old firm of Fianna Fáil and Fine Gael won only 43 per cent of the vote between them. Even if you add in some “gene pool” independents from both camps, it’s clear that the country has moved significantly to the left. That was also visible in the way Sinn Féin transfers – and there were an awful lot of them – tended to stay with parties of the left in many counts.

However, the left of Irish politics is indeed a wide and varied spectrum, ranging from the revolutionary left of Solidarity-People Before Profit, who favour an overthrow of the existing capitalist system, mass nationalisation of business and a huge expansion of the State, with the rather more moderate centre-left of the Labour Party and the Social Democrats – and all points in between.

The biggest beneficiaries, Sinn Féin, published a heavily redistributionist manifesto proposing an increase on taxes on business and the wealthy to pay for expanded public services, but also pledges to maintain the enterprise economy and the multi-national sector.

3 The future matters more than the past

For decades, Sinn Féin’s support for the IRA’s campaign of violence shut the party off from the vast majority southern voters. The IRA’s campaign ended in the 1990s however and despite ongoing questions about paramilitary links and control of the party, it is clear that the party’s history is no longer a barrier for many voters, especially younger people. The party’s message of social transformation is more important to them.

A strong antipathy to Sinn Féin remains however among many older voters, and among those who voted for Fianna Fáil and Fine Gael, there is a strong opposition to having Sinn Féin in government with anyone.

The economic recovery under Fine Gael, from a point of near-bankruptcy and mass unemployment in 2011, has been spectacular by any standards. But many voters either don’t care about it, or disagree with the manner in which it was achieved. Either way, Fine Gael’s economic arguments fell on deaf ears. Politics is usually future-focussed.

Similarly, the referendum to repeal the eighth amendment to liberalise Ireland’s abortion laws was supported by two thirds of voters. But many politicians who campaigned most prominently – including several high-profile women politicians – failed to be elected.

By contrast, several TDs who opposed the change in the constitution were re-elected, including Peadar Tóibín, the Meath TD who was drummed out of Sinn Féin for his views and went on to found Aontú.

Perhaps the one-third of voters who opposed the change didn’t forget. Or maybe voters just don’t think abortion is that important in a general election.

While the choices of many voters are already set before the campaign begins, the days when the parties could rely on the rock-solid loyalty of most of the electorate are gone.

It used to be the case that Fianna Fáil, Fine Gael and Labour campaigners looked at streets and knew that they had several reliable votes in several houses. That time is gone.

The exit poll was within the margin of error on almost everything with the exception of the Sinn Féin vote, which it underestimated by just over two per cent; the emergence, perhaps, of shy Sinn Féin voters.

But the final Irish Times/Ipsos MRBI poll of the campaign was almost exactly right – it had Sinn Féin on 25 per cent, Fianna Fáil on 23 per cent, Fine Gael on 20 per cent, Labour on 4 per cent and the Greens on 8 per cent. At the election all the parties won a share of the vote that was within a single percentage point of these numbers.

Heralded beforehand as the “climate change election”, it became quickly obvious that the issue was very far down the list of voters’ priorities. While the Green Party had its best ever election and will be at the centre of the government formation process, the ambition of any new government’s climate policy will be constrained by the apparent lack of public appetite for the sort of drastic action the Greens believe is necessary. Any measures intended to change the public’s behaviour – but which come at a cost in money or convenience – will need to be very carefully applied.

8 Independents have an enduring strength in Irish politics

One of the most distinctive features of the Irish political system when viewed from outside is the prevalence of independent TDs. That trend has continued, with 20 independents elected to the new Dáil, from all points on the political spectrum. In the case of the outgoing government, their role moved from supporting an administration from the backbenches to actively participating in the government in Cabinet and minister of State jobs.

While the electoral consequences for the independents who were part of Leo Varadkar’s government when the election was called were disastrous – only one out of six has returned to the Dáil – that may not diminish the expectations of any independent TD whose support is solicited for a new government. In politics everyone believes that this time, it’ll be different.