‘I’m just after losing my seat. I have not really thought beyond that’ – John Curran 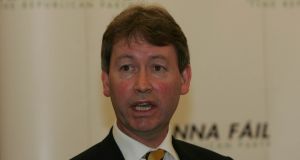 As Eugene Murphy talks on the telephone, loud cheers can be heard in the background at the Hyde Centre in Roscommon town. It’s the sound of supporters of Sinn Féin’s Claire Kerrane responding to her election to the final seat in Roscommon-Galway.

It serves as confirmation for Murphy that the seat he held for Fianna Fáil for the past four years is gone. He is philosophical about his loss.

“ I’m starting my Seanad campaign today. There is no point in looking back,” he says.

In many rural constituencies, especially in the west, Fianna Fáíl and Fine Gael TDs fell victim to the Sinn Féin surge – Lisa Chambers in Mayo; Pat Breen in Clare and Seán Kyne in Galway West. Elsewhere, there was Shane Cassells in Meath West, Regina Doherty in Meath East and Michael D’Arcy in Wexford.

Murphy had known since Sunday that Kerrane was going to take his seat. He attributes it to Sinn Féin’s surge and poor candidate strategy by Fianna Fáil as he and running mate Orla Leyden were too close geographically.

“At the start it was utter devastation,” he said. “It was not a good day for the party either here or nationally.”

Murphy said he “had a fantastic campaign on the ground” but that a few days in he felt things change. The problems of housing, health, insurance and in the beef sector had not been resolved.

“People wanted change and that was it,” he said. “When they looked at Fine Gael and Fianna Fáil they took the view there was a bit of a smell of the establishment.

“Confidence and supply had not worked. Micheál Martin was brave in taking it on when everybody else walked away. But it did little for us and did little for rural Ireland,” he said.

Former Fine Gael TD for Dublin North West Noel Rock was probably more prepared for a loss than most. Constituency changes meant many of his strongest areas moved to the neighbouring Dublin Central constituency.

He said he was “sanguine” about the loss, even though before the campaign proper started he thought he might have a chance of edging out the eventual poll topper – Sinn Féin’s Dessie Ellis.

“It lurched very suddenly. I would say the RIC thing fuelled up the anti-Government sentiment and then there was a pooling effect. In many eyes, Sinn Féin became the only vehicle for change,” he said.

He said he was “okay” about losing the seat. “I feel very sorry for colleagues who though they would have a seat and wake up this morning unemployed.”

Lisa Chambers knew she would face a challenge to retain her seat in Mayo. The former Fianna Fáil TD said: “It is a strong Fine Gael constituency. And then Sinn Féin squeezed us all across the board.”

She said she was still coming to terms with the loss. “I lost some very good colleagues. It’s a tough day when the tide is going out,” she said.

Speaking soon after losing his Dublin Mid-West seat, Fianna Fáil’s John Curran said the party deserved credit for the confidence and supply deal because nobody else was willing to form a government.

However, he said the original commitment was to support three budgets.

“After the third budget I think the public lost confidence in it.”

He said his main concern now was the practicalities of taking down posters and completing post election duties.

“I’m just after losing my seat. I have not really thought beyond that,” he said.

Minister of State for finance and former Fine Gael TD Michael D’Arcy was eliminated on the 10th count in Wexford, trailing his party colleague Paul Kehoe by just 100 votes.

The result was “disappointing”, he said, but he was “looking forward to spending some time with my family now, who have been so supportive throughout my campaign”.

His former colleague, Minister of State Pat Breen, found himself in the same position and said the “Sinn Féin storm out there blew me off course”.

Fianna Fáil’s Malcolm Byrne, who served for less than 10 days in the Dáil after winning a byelection in November in Wexford, was unsuccessful this time around. He said he hoped “to continue to serve my community and country in some capacity in the future”.