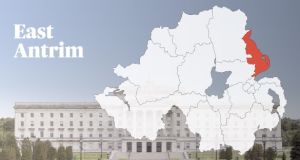 The Northern Ireland Assembly election will take place on Thursday, May 5th. Each of the 18 constituencies – including East Antrim – will elect six Members of the Legislative Assembly (MLAs).

Expect to see the presence of Nigel Farage in some of the towns of East Antrim, such as Larne and Carrickfergus, during the Northern Ireland Assembly election campaign.

Ukip believes it has a real chance of taking a seat here and some local canvassing by its leader might not do the party’s candidate Noel Jordan, a Carrickfergus councillor, any harm at all.

And while there are many farmers in East Antrim who receive Brussels subsidies, it seems that Brexit sentiment is quite strong in the constituency. In the Westminster election last year, between them, the DUP, Ukip, and the Traditional Unionist Voice party (TUV), who all favour the UK quitting Europe, won 53 per cent of the vote.

The last Northern Assembly election in East Antrim five years ago was a cliff-hanger where, in this predominantly unionist constituency, Sinn Féin’s Oliver McMullan made a breakthrough by taking a seat. Now Ukip is hoping to make a little bit of history as well.

In a long two-day count in 2011, the contest for the last seat came down to a two-way struggle between Glens of Antrim native Mr McMullan and Ulster Unionist candidate Rodney McCune, with the Glens man prevailing.

The UUP won just one seat, that of Roy Beggs, while Mr McCune has now transferred to South Belfast in the hope of finally making it to Stormont. Ulster Unionists still have ambitions for East Antrim – along with Mr Beggs, it is running two candidates, John Stewart and Maureen Morrow.

But what Sinn Féin wins it tends to consolidate. Still, it will be a tough enough battle for Mr McMullan to hold the seat. Between Sinn Fein and the SDLP, which is running local councillor Margaret Anne McKillop, nationalists account for about 12-13 per cent of the vote in East Antrim. Margins are tight and Mr McMullan will need strong transfers from the SDLP to get through.

What is significantly different about this election is the absence of Sammy Wilson, one of the DUP’s most outspoken, cheerfully politically incorrect, and popular politicians. With Assembly-House of Commons double-jobbing banned, Mr Wilson opted for Westminster.

Two of the DUP’s outgoing MLAs, David Hilditch and Alastair Ross, are running again, and they are joined by Gordon Lyons who also ran in 2011, but failed to win a seat while still winning a decent 1,321 first preference votes.

The figures indicate that Mr Beggs should be returned for the UUP. Outgoing Alliance MLA Stewart Dickson, who is standing alongside Danny Donnelly, also should be safe, while the DUP at least should be assured of two seats.

Then it gets interesting: where will the final two seats go?

This brings it down to a scrap between Sinn Féin, the DUP, the Ulster Unionists and Ukip.

As stated, once in, Sinn Féin is hard to dislodge and Mr McMullan could come through again.

Which would leave a DUP-UUP-Ukip tussle.

Ukip’s Noel Jordan won 3,660 votes in last year’s Westminster election which if he can replicate and then get the transfers would give him a strong chance of gaining a seat. The disastrous performance by Ukip’s Northern Ireland leader David McNarry’s when discussing his party’s manifesto on BBC’s Stephen Nolan Show didn’t do Mr Jordan any favours, but still his local popularity could transcend that example of car crash radio.

The Traditional Unionist Voice party is running Ruth Wilson who won more than 1,900 votes in the Westminster election. It’s her transfers that may determine the outcome.

The DUP could feel the absence of Sammy Wilson. Also, there just may be sufficient consanguinity between Ukip and the TUV to result in: