DUP could be ‘sold down the river’, says former UK attorney general 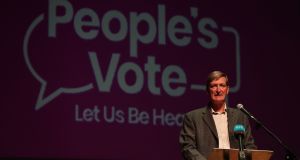 Dominic Grieve: ‘“I have always worried that the DUP’s position, firstly in advocating and promoting leave was a great mistake.’ Photograph: Liam McBurney/PA Wire

Former British attorney general Dominic Grieve MP says the DUP could be “sold down the river” by the Conservative government.

Mr Grieve was speaking ahead of Saturday afternoon’s People’s Vote – Let Us Be Heard event at the Ulster Hall in Belfast calling for the UK public to be given the final say on a Brexit deal.

The MP, who has described his relationship with his former party as “inevitably strained” says a People’s Vote is “the only way out”.

“I have always worried that the DUP’s position, firstly in advocating and promoting leave was a great mistake,” he said.

“Then, anchoring themselves to the Conservative Party’s policy, because they got have nothing else is a high-risk strategy because I can see circumstances in which they will be left, they will be sold down the river.”

Mr Grieve said, as a conservative and unionist, he felt the future of a peaceful and contented Northern Ireland in the UK was important, so the DUP should “think hard” about supporting going back to the public to ask them what they want.

On the criticism of the Belfast event by some as “dull centrism” he said: “There is a powerful movement of moderation in this country. And seeing the way our politics are going, moderation and the application of common sense seems to me to be very valuable.”

Around 700 people gathered at the Ulster Hall on Saturday for the event hosted by former Labour party adviser Alastair Campbell.

Ms Long reminded the audience that the DUP do not speak for the majority of people in the North who she says want no deal off the table.

“Threatening to harm yourself is no negotiation tactic,” she said.

Ms Bailey said Northern Ireland was “ignored” in the lead up to the 2016 EU membership referendum, that the leave campaign broke electoral law, lied and spread misinformation.

Ms Hanna said the people wanted “stability and our future back”.

“We can end austerity, or we can do Brexit but we can definitely no do both,” she said.

During a panel discussion among business leaders entrepreneur Bill Wolsey said he had been appalled by the attitude displayed among some to foreign nationals.

He said people from other countries have “enriched our society” and welcoming people was “something to be proud of”.

Mr Wolsey said he had been offended by comments made by British prime minister Boris Johnson that he would rather “die in a ditch” than ask for a Brexit delay.

He said after 40 years of violence in the North his mind had been “warped” and he thought at the time: “I wish he would come over here, because a couple of boys would put him to the test”, which was met by laughter from the audience.

He added that the language used by Mr Johnson was offensive to people in the North, that it was “ludicrous” and that having liberal views was “something you should be proud of”.

“Millions of people died in the ditch for that one,” he said.

On a panel for under 25s, a young woman from the Our Future Our Choice campaign group told the audience regarding Brexit, “The children of the peace process deserve better than this”.

A handful of protesters stood outside the event.

Among them was Raymond Stuart from South Antrim, who wore a Make America Great Again cap and carried a Leave Means Leave placard.

He said Mr Grieve and Mr Campbell were not welcome in Belfast “because they have rejected the will of the British people, the 17.4m who voted to leave”.

Mr Stuart said he supported Mr Johnson, that he wasn’t sure if the prime minister would betray the DUP and that he wanted him to “stand firm”.

7:20 Restarting Ireland: When and how will we ‘get back to normal’?