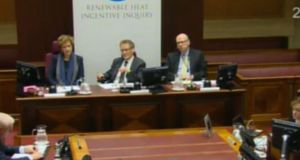 The DUP’s chief executive has rejected claims he knew party advisers were working on cost controls on Northern Ireland’s botched green energy scheme, saying he was “absolutely certain” he had not instructed a delay.

Timothy Johnston told a public inquiry into the Renewable Heat Incentive (RHI) he was not aware of the work two fellow special advisers were doing on the botched scheme during the summer of 2015.

The inquiry is investigating how costs spiralled for Northern Ireland’s RHI scheme, which was aimed at encouraging the use of green energy.

It is also looking into allegations that some DUP special advisers attempted to delay the introduction of cost control measures in 2015.

He was giving evidence to the inquiry into the handling of the lucrative subsidies for businesses switching to more eco-friendly fuels.

The inquiry earlier how heard DUP special adviser Timothy Cairns claimed he sought advice from fellow party adviser Dr Andrew Crawford while they worked on a policy in delaying the introduction of cost-controls.

Mr Johnston, the DUP’s most senior official, said he “couldn’t recall” a phone conversation with Mr Cairns in August 2015 in which they spoke about the delay of cost-control.

Mr Cairns claimed Mr Johnston was made aware of plans to “seek the latest date officials can live with” in the delay, adding Mr Johnston did not raise any objections to this.

However, Mr Johnston said he had “no memory” of that conversation and denied ever receiving a emailed submission from Dr Crawford about RHI.

“I would not have been surprised if the two men were interacting on DETI [Department of Enterprise] business,” he said.

When questioned about the email sent by Dr Crawford, he said he never opened it and left to go on holiday.

“This goes right to the heart of why I think I am sitting here today and over the last two years I have been scratching my head as to how this has traced back to me.

“I am absolutely certain that there was no discussion about RHI or the other issue [tariff control] in that period.”

During the hearing, Mr Johnston was described as the “second most powerful person in the DUP” behind the leader of the party.

It came after he was accused of sending a “blunt and not respectful” email to former DETI minister Jonathan Bell, which the inquiry’s junior counsel Donal Lunny said suggests he is above Mr Bell in the rank structure.

Evidence was put to Mr Johnston to reflect his seniority within the party including an email exchange with former Stormont Executive press officer David Gordon, in which Mr Gordon suggests to make a “scary TJ call to [Stephen] Nolan” over queries from his BBC radio programme about RHI.

Mr Johnston said he has worked within the DUP structure for a long time and with that came a “greater sense of knowledge”.