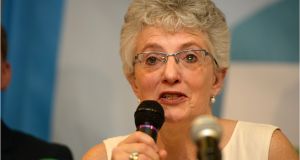 Independent Katherine Zappone was “unreservedly jubilant” after she was confirmed as elected in the Dublin South-West constituency on Monday night.

The Independent candidate took the fifth seat despite two rechecks called for by Fine Gael, whose candidate Anne Marie Dermody lost out by 152 votes.

Fine Gael is now considering whether to legally challenge the decision of the returning officer not to allow a fresh count of the 67,200 votes.

Ms Zappone had been trailing Ms Dermody but surged ahead of her on the 16th count after taking the bulk of 4,916 transfers available after the elimination independent candidate Peter Fitzpatrick in count 15. She was declared elected at 3am on Sunday, having polled 9,655 votes compared to Ms Dermody’s 9,503. Fine Gael requested a recount immediately.

A recheck of the 16th and 15th counts got underway on Sunday and founddiscrepancies in about 50 ballot papers were found, amounting to a “material” level Fine Gael argued undermined the integrity of the entire count.

A full recount or re-examination of all counts took place yesterday and the findings of that were presented to the candidates and the legal advisors at 8.30 pm. It found “no material difference” win the election result as declared at 3 am on Sunday, when Ms Zappone had been declared elected.

Reacting, Ms Zappone said: “I am feeling unreservedly jubilant right now. I am feeling absolutely fabulous. I am so, so privileged to be elected to represent the people I have worked with for so many years and to have all my incredible team here with me.”

She was greeted with cheers and applause as she emerged from the briefing with the returning officer. She thanked the counters at the Citywest Exhibition Arena, who had worked over three days to bring the result in.

She said the last few days had been “challenging” and she said she wanted to offer Ms Dermody her support as she “must be feeling the loss right now”.