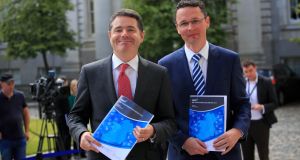 Minister for Finance Paschal Donohoe and Minister of State Patrick O’Donovan at a press briefing on Thursday around a mid-year expenditure report from the Department of Finance. Photograph: Gareth Chaney Collins

Minister for Finance Paschal Donohoe has played down the prospect of abolishing the special 9 per cent VAT rate for the hospitality industry, citing concerns over Brexit.

Mr Donohoe has faced pressure from within the Department of Finance to phase out the lower rate which was introduced in 2011 by his predecessor Michael Noonan.

Speaking before the Oireachtas Budgetary Committee, the Minister said €600 million would be generated if the rate was returned to 13.5 per cent. However, he indicated the increased rate would generate a number of other economic effects.

“One of the issues I have to consider is the number employed by the tourism industry and in the service sector. For example, the impact on sterling of Brexit and, therefore, the number of British visitors coming to Ireland has to feed into the decision.

“The read-out from our airports regarding the number of British visitors also has to feed into my decision. However, all the decisions will be taken together later in the year.”

The 9 per cent VAT rate for tourism-related activities such as restaurants, hotels and cinemas was introduced to encourage growth and employment in the sector. Hospitality groups have consistently lobbied for its retention.

A briefing note prepared for Mr Donohoe said the lower rate was “initially introduced on a temporary basis to give a boost” to the hospitality sector, and was retained in the last budget because of concerns that Brexit could impact on tourism.

“While all the indications are that the measure has done its job with robust growth in visitors and employment in the tourism area, the general recovery of the economy and increasing prices in the sector raises questions about its future,” the briefing note states.

Mr Donohoe stressed that no taxation decision had been taken ahead of the budget announcement, which will take place on October 10th.

The Minister also confirmed there was €300 million available for new measures in the budget, but indicated this may increase incrementally between now and October. “It is possible that the fiscal space will change a bit as we go through the year, but I am not expecting it to multiply.”