Possession of small quantities of drugs could be decriminalised

National Drugs Strategy will govern approach to substance abuse through 2020 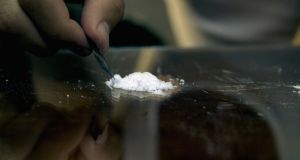 The working group will be also asked to provide an analysis of alternative approaches to criminal sanctions for drug possession.

The possession of small quantities of drugs including heroin, cocaine and cannabis for personal use could be decriminalised under proposals being announced by the Government on Monday.

Taoiseach Leo Varadkar, Minister for Health Simon Harris and Minister of State for Drugs Catherine Byrne are to publish the National Drugs Strategy, which will govern the official approach to substance abuse through 2020.

The strategy will confirm the establishment of a working group to assess alternatives to criminal convictions for minor drug possession. It will be tasked with exploring the approaches taken in other jurisdictions and reviewing current legislation applying to simple possession offences.

The working group will be also asked to provide an analysis of alternative approaches to criminal sanctions. It will be asked to make recommendations to the Minister for Health within 12 months.

The changed position is aimed at achieving a health-led approach rather than criminalising those in possession.

The strategy, seen by The Irish Times, says: “Many people who use drugs problematically come into contact with the criminal justice system and acquire criminal convictions, either directly or indirectly related to their drug use.

“Criminal convictions can represent a serious impediment for people seeking to move on from drug misuse and involvement in crime, particularly in the areas of access to employment, housing and travel.”

The Oireachtas committee on justice has previously completed a report on the matter and proposed such an approach.

One of the first countries to decriminalise drugs for personal use was Portugal in 2000 and now people found in possession are brought in front of a commission made up of a social worker, a psychiatrist and a lawyer. The approach has been credited with reducing the number of overdoses, new HIV cases and increasing the numbers seeking treatment for drug addiction.

Criminalising possession of small quantities of drugs is seen as counter-productive for the individual and expensive for society, and many believe it would be more productive to provide quick referrals to treatment services.

The strategy will also place a significant focus on pregnant and post-natal women and expanding alcohol and drug addiction services for mothers.

Additional residential placements will be provided, the role of drug liaison midwives will be expanded and maternity hospitals will be requested to strengthen their methods of detecting alcohol abuse.

The strategy, which will be published in full today, will also commit to reducing the impact of parental substance misuse on babies and young children by developing protocols between addiction services and social care workers.

Needle exchange programmes will be expanded, screening for blood-borne viruses and increasing the uptake of the Hepatitis C treatment will also be committed to.

The strategy will pledge to expand the availability and the geographical spread of drug and alcohol services.

The strategy launched today contains 50 recommendations and strategic goals have been identified including the promotion and protection of health and wellbeing, minimising the harm caused by the use and misuse of substances, reducing access to drugs and supporting families and communities affected by drugs.