Replacement for Creighton 'very conscious' of circumstances of new role 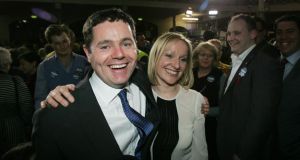 Paschal Donohoe and Lucinda Creighton celebrate their election in the RDS during the 2011 General Election. Photograph:Alan Betson /The Irish Times

New Minister of State for Europe Paschal Donohoe said he is “deeply humbled” by his appointment and very conscious of the circumstances in which it has happened.

The Dublin Central FG deputy was appointed to replace Lucinda Creighton after she voted against the Government on the abortion legislation last night.

He was on his way home from the Dáil after the vote at 1pm and received a call from the Department of the Taoiseach asking him to come back in.

She had made a “huge contribution” to political life and he did not imagine that he would find himself as a minister as a consequences of the challenges she faced, he said.

The Minister said he would like to see TDs who had left in recent weeks “play a role in the party in the future”.

The party was “the poorer” for the absence of these TDs following the abortion vote.

Mr Donohoe maintained he would have voted for the abortion legislation were there no whip. Asked if he would like to see the Bill referred to the Supreme Court, Mr Donohoe believed it was in the interest of all concerned that the precise constitutionality of the Bill be answered.

Mr Donohoe also spoke about his appointment as a “gigantic surprise”. “I sit here now deeply humbled....and very conscious of the job I have to do, ”he said.

He was very conscious of taking on the role in the aftermath of the European presidency. However he said there were two “vast challenges” that the State would be directly facing, he told RTÉ Radio.

The question over Britain’s decision over membership of the EU raised issues such as access to the common market and the way Ireland traded with it, he said.

The second challenge was to ensure Ireland successfully exited the bailout programme and he wanted to play “whatever role” in that which he could.

The 38-year-old Minister was elected to the Dáil on his third try in the constituency of Dublin Central when he topped the poll in 2011. He previously missed out on a seat in the 2007 general election and the 2009 bye-election. He was a senator from 2007 when he served as Fine Gael’s Seanad Transport spokesman. Prior to that he was a Dublin City Councillor from 2004 to 2007 when he chaired the central area committee.

During his time at the Oireachtas he has been a member of the Public Accounts Committee, vice-chairman of the European Affairs Committee and chaired a sub-committee which produced a report on Ireland’s future in Europe.

He went to school at St Declan’s CBS in Cabra and has a 1st class degree in politics and economics from Trinity College Dublin. After graduation he worked as a Sales and Marketing director for a multinational company until 2006.

The married father-of-two lives in Shandon Park, Phibsborough in his Dublin 7 constituency.

Among the “other interests” part of the new minister’s biography are his enjoyment of modern art and crime fiction and his favourite films being the Shawshank Redemption and American Gangster . According to his Facebook profile, his favourite quote comes from John Cleese: “I can handle the despair, its the hope that drives me crazy”.