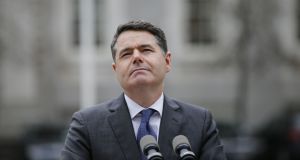 Minister for Finance Paschal Donohoe has come under fire for meeting the management of Hyde & Seek, the creche chain ordered to close by Tusla.

Four of the firm’s creches in Dublin – at Tolka Road, Shaw Street, Glasnevin, and Millbourne Avenue – were due to shut down by the end of December on foot of “consistent and serious breaches” of childcare regulations, a move now delayed following a court hearing this week.

In a recent email to parents from Hyde & Seek management, the company said the two politicians “were keen to help as much as possible”.

Sinn Féin leader Mary Lou McDonald said she was “alarmed” by Mr Donohoe’s apparent mediation and said it was not helpful.

She said it was “not appropriate for any elected official to mediate on behalf of the management of this facility which is to be de-registered in light of the serious breaches of child safety”.

Ms McDonald, who shares the same Dublin Central constituency as Mr Donohoe where the creches are based, said the parents and children had experienced considerable stress and have the added pressure of finding alternative arrangements.

“The priority now must be to ensure safe and appropriate care for the children and that parents are not left stranded,” she said.

A spokeswoman for the Minister defended last Friday’s meeting and said despite being asked to intervene on the issue of future insurance cover in particular, Mr Donohoe “explained that insurance cover is a matter for insurance companies”.

“At all times he stressed his support for the independence of Tusla and their work for the regulation of childcare,” she said. “This was explicitly stated by the Minister in each meeting. The meetings were driven by an acknowledgment of the stress for parents caused by this issue.”

This week the district court ruled that Tusla’s deregistration of the creches could not take place until after the legal proceedings, due to begin in February, had concluded. At that time an appeal against deregistration by Hyde & Seek management could be heard.

Management has vowed to defend its services and to continue operating as well as “vigorously challenging” the content of the RTÉ documentary that had examined the company’s operations.

Councillors whose constituents are affected by the pending closures also raised questions about Mr Donohoe’s decision to meet the company.

“It’s not appropriate that the Minister would meet with these individuals at all, under any circumstances,” said Independent councillor Mannix Flynn.

“Here is a situation where we know what happened, what Tusla recommended, and you have a Minister meeting with them and not only that, a senior member of Cabinet.”

Social Democrats councillor Gary Gannon said politicians had come under considerable pressure from affected parents to resolve the situation given the imminent threat of Hyde & Seek’s closure and the lack of alternative childcare.

He said Mr Donohoe needed to clarify whatever assistance he may have offered. “I think that is what Paschal needs to make clear.”