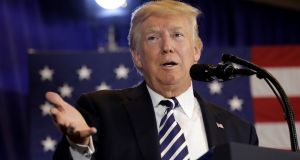 US president Donald Trump is to visit Ireland in November, the White House has announced. Photograph: Yuri Gripas/Reuters

The Government has welcomed the announcement that US president Donald Trump is to visit Ireland in November.

The White House confirmed on Friday that US president Donald Trump is to visit Ireland in November.

Mr Trump is expected to visit Ireland as part of his planned trip to Europe in November, when he is due to attend the Armistice commemorations in Paris on November 11th.

The visit will mark Mr Trump’s first trip to Ireland since his inauguration as President of the United States in January 2017.

In a statement announcing the visit, the White House said that Mr Trump will visit Ireland “to renew the deep and historic ties between our two nations.”

A Government spokesman said “the Taoiseach understands that President Trump will stop in Ireland for a brief visit on his way to or from the Armistice commemorations in Paris.

“It will be an opportunity to follow up on the issues discussed in the White House in March including migration, trade, climate change and human rights issues,” said the spokesman.

His last visit was in 2014 when he was greeted by then Minister for Finance Michael Noonan and other local officials at Shannon Airport as he exited his jet.

Taoiseach Leo Varadkar invited Mr Trump to Ireland during the St Patrick’s Day celebrations in Washington earlier this year. Speaking alongside Mr Varadkar in the Oval Office in March, Mr Trump said he would “love to” visit Ireland, pointing out he had a golf course there. “I look forward to being there. It’s a great country,” he said.

Nonetheless, the Government has been highly critical of some aspects of US policy under Mr Trump. In June, the Dáil agreed a cross-party motion condemning US policy of separating parents and children at the border.

Mr Varadkar said that it seemed America was “more and more departing from its own values” as he quoted words written on the US Statue of Liberty: “Give me your tired, your poor, your huddled masses, yearning to breathe free.”

Mr Trump bought the five-star Doonbeg Lodge and Golf Club for an estimated €15 million in 2014. It emerged during the St Patrick’s day visit this year that Mr Varadkar contacted Fáilte Ireland when he was Minister for Tourism over a proposal to build a wind farm near the resort.

The council ultimately turned down the application for the windfarm.

Mr Trump’s visit will take place a week after the mid-term elections where Republicans are expected to face a tough battle to retain control of the House of Representatives and potentially the Senate.

The US president confirmed earlier this month that he would the centenary commemorations to mark the end of World War I in Paris on November 11th after cancelling a proposed military parade in Washington DC.

French president Emanuel Macron is hosting a major commemorative event to mark the 100 year anniversary of the end of the four-year war on November 11th which will be attended by European and world leaders. It is not clear if the Taoiseach will attend the event in Paris.

The Government announced this week that the inauguration of the next President will take place on November 11th, a date that will clash with any commemorative event to mark the centenary of the end of World War One.

The Government said it was constitutionally bound to hold the Presidential inauguration on the centenary of the Armistice, though Labour Party leader Brendan Howlin has called for the date of inauguration to be put back.

Labour Senator Aodhán O Ríordáin, who strongly condemned the Government’s invitation to Mr Trump in March, said the visit on the back of that invite was “completely and utterly disappointing.”

He expects Mr Trump will be greeted by “huge protests” .

He said that it was important for the country to send “a strong message to the Trump administration that we reject absolutely and entirely his kind of politics.”

“What is disturbing is that we have a unique opportunity in the fact that we lie between Trump and Brexit to speak about the Irish experience and to reject what Trump has stood for, the rhetoric that he is propagating, the lies he is telling, the hate that he is trading and to stand for something a bit more decent and bit more in keeping with the Irish experience,” Mr O Ríordáin said.

“If we are just going to go along and accept the this person will travel to Ireland then I think the Irish people will have something to say about that.”

He understood the importance of maintaining good diplomatic relations with the US but added: “At what point do you have to say something about this?”

“What is the breaking point where what he does is no longer acceptable?” said Mr O Ríordáin. “It appears that there is no breaking point for this Government when it comes to this man.

Mr Trump’s visit was particularly inappropriate when thousands of “undocumented” Irish in the US are worried about their status due to his anti-immigration rhetoric and policies, he said.

“At what point do we say this individual has crossed a line? Sending an invite is something we shouldn’t do in these circumstances,” said the Labour spokesman on education.

People Before Profit TD Richard Boyd Barrett condemned the visit and the Government for inviting the US president, saying that it was “shameful that Leo Varadkar would welcome the odious Donald Trump into this country.”

“His poisonous, hate-filled and dangerous politics are not welcome in Ireland and I would urge everybody who opposes war and racism and who cares about equality and the planet to join the protests that we will certainly organise against Trump when he comes,” he said.

A spokeswoman for the Labour Party said that it would “join with like-minded people to oppose this visit.”

“President Trump has shown himself to be no friend of democracy or human rights,” she said.

“While we will always be firm friends of the American people, Ireland will not welcome a man with Trump’s record of discrimination, sexism and lies.”

Green Party Leader Eamon Ryan called for Irish people to show their disgust and rejection of the Trump administration’s policies by turning out, in large-scale mass protest around the country.

“These policies do not reflect the Irish people’s values - we need to show him and the world that this is not normal. Decency, integrity and fact-based politics still exist and are worth defending. We’re calling on Irish people to tell our Government to cancel this visit; and for them to demonstrate in never-before-seen numbers should they fail to do so, ”he said.

Statement from the Press Secretary

“President Donald J. Trump will travel to Paris, France, to participate in a November 11th commemoration of the 100th anniversary of the armistice that ended the fighting in World War I.

The President’s participation in this event will highlight the sacrifices that Americans have made, not only during World War I but also in the century since, in the name of liberty.

While in Europe, the President also will visit Ireland to renew the deep and historic ties between our two nations.”