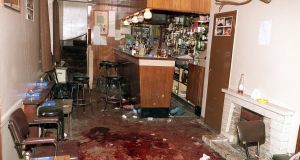 The interior of O’Toole’s bar in Loughinisland, Co Down the morning after the UVF shot dead 6 people on June 18th, 1994,

Bereaved families of the 1994 Loughinisland massacre victims want “arrests, prosecutions and accountability” to flow from allegations emerging in a new documentary about the atrocity by loyalists, their lawyer has said.

No Stone Unturned, a new film by US director Alex Gibney — which names the chief suspects in the murders for the first time — was shown to the families on Friday evening and will be screened in cinemas across Ireland from November 10th. The film suggests that:

On top of naming the three main suspects for the first time the documentary also names the wife of the suspected gunman, who worked in the canteen of a police station. It sets out how she made phone calls to police and sent a letter to an SDLP councillor naming her husband and the other two suspects, and also claiming she had a part in planning the attack.

Emotional screening this evening of ‘No Stone Unturned’ in Loughinisland. Opens in cinemas next Friday. pic.twitter.com/lGvmtbCDM7

The families’ solicitor Niall Murphy, from KRW Law, told The Irish Times they consider the only outcome from the film is that the PSNI “should arrest and charge people with offences arising from the atrocity”.

“That this hasn’t happened in the last 23 years since the atrocity is an inexcusable disgrace knowing now what we know,” he said.

He added: “Between the Ombudsman report and this film the families have achieved their core aim of truth recovery but they now want accountability. “Justice is a two stage process, it can’t be a report that sits on a shelf, there must be action and there has been no action.”

The police ombudsman’s 2016 report into the massacre identified collusion as a significant feature of the killings. In Dr Michael Maguire’s report he revealed police informants at the most senior levels within loyalist paramilitary organisations were involved in the importation of guns and ammunition, that were used to claim many lives.

In the film Barney Green’s niece Moira Casement tells the filmmakers of her belief that collusion in Loughinisland extends to the British government. “I really do believe it goes as far up to right to the top,” she said.

One of the keys issues contributing to the failure of Stormont parties to form an Executive since January is dealing with the legacy of the past and giving effect to the legal architecture of the Fresh Start and Stormont House agreements.

No Stone Unturned will be screened in the following cinemas from November 10th: