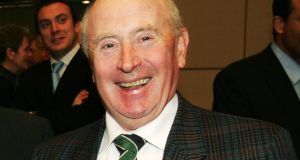 Dick Burke was first elected to the Dail for Dublin South in 1969 and was immediately appointed as chief whip of Fine Gael by Mr Cosgrave. Photograph: Frank Miller

Former government minister and European Commissioner Dick Burke has died at the age of 83.

Mr Burke was first elected to the Dail for Dublin South in 1969 and was immediately appointed as chief whip of Fine Gael by Mr Cosgrave.

He was appointed minister for education on the formation of the Fine Gael-Labour coalition in 1973 and became Ireland’s second European Commissioner in 1976.

In 1974 he was one of a small number of Fine Gael TDs who voted with Mr Cosgrave against the family planning legislation introduced by their own government.

He returned to Ireland after his term in Brussels and was elected as a TD for Dublin West in the 1981 election. In 1982 he accepted an offer from the Fianna Fáil taoiseach Charles Haughey to go to Brussels for a second term.

Mr Burke is survived by his wife Mary and six children. “It is with sadness that I have learned of the death of former Minister and EU Commissioner Richard Burke,” said President Michael D Higgins.

“He will be remembered for his two terms as EU Commissioner under two different governments and his contribution as Minister for Education to the establishment of a comprehensive system of higher level education.

“To his wife Mary, his children and extended family, I extend my heartfelt sympathy.”

Former taoiseach John Bruton said he wasshocked to learn of the death of his friend, who was elected to the Dáil on the same day in 1969 as he was .

“Dick Burke was a very successful, reforming, minister for education, with concrete achievements to his name. He introduced the transition year and school management boards.

“To have persuaded the various ‘establishments’, that dominated education in Ireland at the time, to accept, and to successfully operate, these major reforms was a big negotiating achievement,” said Mr Bruton.

He said Mr Burke had been able to achieve this because he won the trust of existing institutional interests.

“While he wanted change, he was able to make it happen because he also showed respect for what the existing institutions had achieved for the children of Ireland in times when resources were more scarce,” Mr Brutonsaid.

He said Mr Burke had also relaxed the compulsory Irish system in education, and introduced Irish studies, as a way of promoting a more inclusive understanding of what it is to be Irish and his thinking on this was ahead of his time.

Mr Bruton, who was a parliamentary secretary in the Department of Education when Mr Burke was minister said he had been a pleasure to work for.

“He delegated responsibility, but was always accessible for advice. He was supportive without being intrusive. I can never recollect him being angry, although he would have had reason to be sometimes,” said Mr Bruton.

He said that after they were elected to the Dáil on the same day in 1969 his first responsibility was to act, with Dr Hugh Byrne, as one of his two assistant whips, when Burke was appointed to be chief whip of the Fine Gael party by Liam Cosgrave.

“In ideological terms, Dick Burke was proud to be a Christian Democrat. As a student of Christian and Catholic Social teaching, he fully understood this political tradition.

“When Ireland joined the European Common Market, he was particularly happy to have been one of those who persuaded the Fine Gael party to associate itself with the European Christian Democratic movement, now the European Peoples Party. This was a far seeing decision that continues to enhance Ireland’s influence in Europe to this day.”

After his first term as Commissioner he returned to win a Dáil seat for Fine Gael in the 1981 general election in a completely different constituency to the one he had first represented.

“This was a remarkable and almost unique political achievement,” said Mr Bruton who added that to the end of his life, Mr Burke continued to take a deep interest in the Fine Gael party and attended party events to show support for current leaders of the party.