Deadly virus should be treated like Covid-19 for hare population, junior minister says 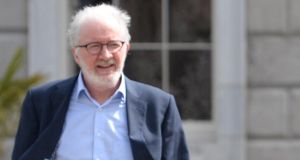 A deadly virus that has spread to the hare and rabbit population in Ireland is likely to allow two Green Party Ministers avoid making a highly embarrassing political decision to allow hares be captured for coursing.

One of the two Green Party TDs with responsibility in this area, Minister of State for Heritage and Electoral Reform Malcolm Noonan, has said this weekend that rabbit haemorrhagic disease (RHD2) should be treated at the “same level of caution for our Irish hare population as we do with Covid”.

He argued the storage of hares for prolonged periods in coursing parks would further add to the risk of spreading infection. The virus was first identified in commercial rabbit farms in China. The disease was discovered in Ireland for the first time last year among carcasses, with five hares killed in Dublin and Wexford, and 29 rabbits across 12 counties.

The licences, issued under the Wildlife Acts, fall due in early August to allow coursing clubs capture live hares for the coursing season, which runs during the winter months.

Last year, after the first RHD2 cases emerged in Ireland, then minister Josepha Madigan (FG) suspended the licences pending further study into the prevalence of the disease among the hare and rabbit populations. The indigenous Irish mountain hare is a protected species under the Wildlife Acts.

However, after intensive lobbying from coursing clubs, and from 16 rural TDs, Ms Madigan issued a restricted licence that ran from November. It imposed 35 conditions including that no hares be captured from within a 25 kilometre radius of RHD2 outbreaks.

Following the change in government, the responsibility for issuing the licences falls to two Green Ministers, Minister for Media, Tourism, Arts, Culture, Sport and the Gaeltacht Catherine Martin, and the junior minister in her department, Mr Noonan.

During government negotiations, the Green Party tried unsuccessfully to ban hare coursing in Ireland. The Minister cannot decide to refuse or suspend the issuing of the licence unless there are extenuating circumstances that warrant it.

It is understood the Green Ministers will likely follow the same course of action as Ms Madigan by suspending the licences. While extensive tests conducted among hares captured for coursing last year uncovered no instances of the disease, there has been anecdotal evidence of new cases elsewhere. In addition, the Covid-19 pandemic has meant that further testing of samples has not been possible at Department of Agriculture laboratories.

If a further decision has to be taken on lifting the suspension later this year, the likelihood is that neither Green Minister will be the decision-maker. Under transfer of responsibilities between departments, it will be Minister for Housing Darragh O’Brien who will be ultimately responsible for decisions relating to heritage from the autumn, although Mr Noonan will still have a role.

At the weekend, Mr Noonan said he had written to the secretary general of his department outlining his concerns about RHD2.

“It’s a highly contagious, easily transmissable and fatal virus that could decimate the Irish mountain hare; a protected species under the Wildlife Acts.

“The reporting of new cases in both rabbits and hares on the island of Ireland is a cause for deep concern and should be a determining factor in the decision to issue netting licences this year,” he said.

Hares are netted in the wild, transported in boxes, and then kept in compounds in coursing parks. Those who survive are later released into the wild.

They tend to be solitary animals, seen alone or in pairs. Concerns have been expressed that congregating them could contribute to the spread of the disease.

“I think we need more extensive research, additional resources for the National Parks and Wildlife Service, and monitoring,” said Mr Noonan. “Whether the decision is mine or that of a senior minister I think these factors should strongly influence the decision to issue licences.”