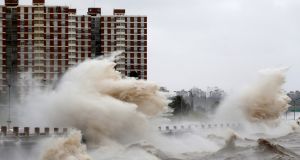 “Millions of people across the equator are right now feeling the effects of the El Niño phenomenon”. Photograph: Reuters/Andres Stapff

Mr Healy-Rae has made a number of controversial statements on climate change, including one this week in which he claimed that nuclear testing in the Pacific Ocean 50 years ago had caused serious damage to the ozone layer.

Mr Brassil, who is a constituency rival, said the TD’s comments were absurd and without any basis in science.

He said: “Deputy Healy Rae’s approach to climate change smacks of US Republican nominee, Donald Trump. However, I suspect that even Donald Trump wouldn’t want to be associated with the comments made by my constituency colleague.

“Do the public out there really think that this is what the elected representatives of Co Kerry truly believe? What Deputy Healy Rae said is totally bogus, and underlines the need for more, not less, focus on climate change in Ireland.”

Mr Healy-Rae has said he does not believe in climate change, insisting it is God who controls the weather.

Speaking in the Dáil this week the Independent TD dismissed the use of electric cars as a means of safeguarding the environment.

Mr Healy-Rae also claimed that nuclear testing in the Pacific Ocean 50 years ago had caused serious damage to the ozone layer. “I am thankful it is now mending and curing. It has nothing to do with policies in any country in recent times.”

Mr Brassil said climate change was a real threat, one that would pose dangers for the next generation.

“The freak weather conditions experienced every year for the past five years are evidence enough for anyone to realise that this problem is real and won’t go away,” he said.

“The facts are clear – excessive use of Chlorofluorocarbons (CFCs) since the 1940s caused the hole in the ozone layer, and the reduction in CFCs since the 1990s has caused that hole to narrow.”

“Deputy Healy Rae should base his Dáil contributions on fact, not fiction, and deal with the real threats climate change presents to the world.

“Millions of people across the equator are right now feeling the effects of the El Niño phenomenon. It’s real for them, and those of us with the ability to stem future challenges have a role to play in meeting them head-on, and not just stick our heads in the sand, and hope they go away.”