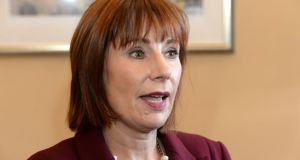 Minister for Culture Josepha Madigan described the political system as ‘archaic’ and said her job was a ‘sacrifice and a privilege’. Photograph: Cyril Byrne/The Irish Times

Minister for Culture Josepha Madigan has said the pressures of political life meant she could only spend “around five minutes” with her family during the last midterm break.

Ms Madigan described the political system as “archaic” and said her job was a “sacrifice and a privilege”.

Speaking to The Irish Times ahead of International Women’s Day, Ms Madigan backed the introduction of gender quotas in local elections while also highlighting the toll a political career could have on family life.

“I certainly haven’t reached a balance yet, like we had the midterm break I think about two weeks ago and I have two boys, they are two teenage boys, but I saw them, I think, for five minutes for the entire week which really doesn’t hearten anybody trying to get involved in politics, particularly at a ministerial level. But I am doing it so that other women don’t have to do it.”

She said the structure of the Dáil is “very male” and is “anti-family” and “anti-women”.

It comes as the Cabinet held a special meeting on Friday morning dedicated to issues on gender equality.

“The way political party funding is calculated requires that at least 30 per cent of your candidates going forward for a general election must be female, and if not you lose State funding,” Mr Varadkar said.

Ms Madigan has also called for an international bishop’s conference to address the issue of female participation in the priesthood.

She said the current status quo was “absolutely wrong” and said she had been approached by priests and nuns who are privately encouraging her to continue her campaign to include women in the clergy.

“I think Irish people are crying out for some spirituality and some guidance and a lot of women have left or moved away from the church.”

1 Three relatives dead after apparent murder-suicide in Kanturk, Co Cork
2 Gardaí not seeking anyone else in relation to Cork shooting deaths
3 Almost 20% of staff at Dublin hospital have antibody evidence of Covid-19 infection
4 Woman stranded in Ireland due to pandemic has ‘miracle baby’
5 Cork suspected murder-suicide may have been over disputed will
Real news has value SUBSCRIBE