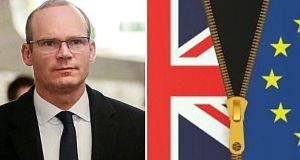 Simon Coveney said ‘it is the most appropriate approach given the complexities over the challenge we face’.

The Dáil has passed a major omnibus Bill with 22 parts, involving 11 Government Ministers and aimed at lessening the impact of Brexit on Ireland.

Minister for Foreign Affairs Simon Coveney described the Bill as a “very unusual piece of legislation”.

He told the Dáil that “it is the most appropriate approach given the complexities over the challenge we face”.

The Withdrawal of the United Kingdom from the European Union (Consequential Provisions) Bill includes measures to protect the Common Travel area, continues existing Irish-UK healthcare co-operation and allows Irish and UK students to continue to be able to study in each other’s state.

The Bill was passed by acclamation after the only row on the legislation when Opposition TDs accused Minister of State Sean Fleming of acting dishonourably, in bad faith and “childishly”.

Opposition TDs levelled the charge when Mr Fleming refused to accept a proposal to review the effect of changes to the threshold for VAT refunds to tourists who live outside the European Union.

The Minister rejected the review because TDs called a vote on his amendment to set the threshold at €75.

Tourists from outside the EU can reclaim VAT on crafts and gifts bought during their stay in Ireland in what is known as the retail export scheme.

The Government initially proposed limiting VAT refunds to non-EU tourists on goods costing €175 or more but reduced it to €75 after TDs and businesses warned of the impact on the tourism sector. Opposition TDs argued that the threshold should remain at zero because half of all tourists buy items worth less than €75.

The Minister said the threshold was necessary to protect revenues and “minimise the scope of abuse of the scheme”, given Ireland’s proximity to the UK and the volume of traffic between the two countries.

Independent TD Matt Shanahan said 60 per cent of Waterford Crystal’s international business would be affected by the change.

Labour TDs Brendan Howlin and Ged Nash proposed a review in 12 months but when Mr Fleming rejected the review after a vote was called on the €75, Mr Howlin accused him of showing bad faith and having “a fit of pique”. Mr Nash said he was being “precious” and Sinn Féin TD John Brady claimed he was behaving childishly.

Mr Howlin said the Opposition had stood “shoulder to shoulder” with the Government on the Bill in solidarity and Mr Fleming’s behaviour was unacceptable.

Minister of State for European Affairs Thomas Byrne said there would be huge changes “deal or no deal “when the transition period ends on December 31st.

He thanked the Opposition for their co-operation on the Bill which now goes to the Seanad where he said further amendments may be considered.